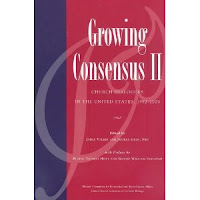 Interested in Ecumenism Means You, Too? Order the book directly from Cascade Books or via Amazon.
Posted by Steven R. Harmon at 9:14 AM