Academic Witness Within the Church 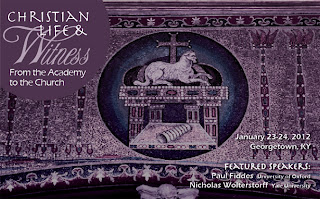 Earlier this week I made a presentation on the program of a conference on Christian Life and Witness: From the Academy to the Church sponsored by the Center for Christian Discernment and Academic Leadership at Georgetown College in Georgetown, Kentucky (January 23-24, 2012). As member of a three-person panel that addressed the theme "Academic Witness to the Church," I spoke on "Academic Witness Within the Church: 'Excluding No Light from Any Source.'" The text of my remarks appears below:

Academic Witness Within the Church: ‘Excluding No Light from Any Source’

In 2004 I participated in a conference at Baylor University not unlike this one. The theme of that conference was Christianity and the Soul of the University: Faith as a Foundation for Intellectual Community. Its focus, then, wasn’t on academic witness to the church but rather academic witness within the academy—which could also be construed as the church’s witness to the academy, for it was the faith of the church that was under consideration as a foundation for intellectual community.

In my contribution to the conference and the book that grew out of it, I contended that constructive conflict located within a tradition grounded in the practice of worship is vital for the integration of faith and learning in the postmodern context of today’s Christian university. I drew heavily on the work of Alasdair MacIntyre on the inescapably traditioned nature of rationality in general and moral reasoning in particular. In his book After Virtue he defines “a living tradition” as “an historically extended, socially embodied argument, and an argument precisely in part about the goods which constitute that tradition.” MacIntyre explains, “when an institution—a university, say, or a farm, or a hospital—is the bearer of a tradition of practice or practices, its common life will be partly, but in a centrally important way, constituted by a continuous argument as to what a university is and ought to be or what good farming is or what good medicine is. Traditions, when vital, embody continuities of conflict.” If a tradition does not embody this continuity of conflict, he says, “it is always dying or dead.”

It seems to me that the applicability of MacIntyre’s take on robustly contested communal traditions to the academic community of the Christian university can be extended to the ecclesial community of the church and to the complex web of interrelationships between these academic and ecclesial communities. Each academic and professional discipline of the university has its own distinctive ongoing argument about the good that constitutes the tradition of that field or profession. But the community of the Christian university and the community of the church have in common the Christian tradition. The Christian tradition, even in those Christian traditions for which there is an authoritative articulation of the tradition, is not a static body of fixed propositional truths, but “an historically extended, socially embodied argument.” Take a look at the proceedings of the Second Vatican Council, for example, or even the Council of Trent—what one finds there is a fascinating account of passionate intra-Catholic debate about the good that constitutes the tradition. Any church has a “living tradition” and not a dying or dead tradition only to the extent that it participates actively in this ongoing argument. The academy of the Christian university has as part of its vocation the furthering of this argument, to which the academy has distinctive and indispensable contributions to make—but this argument is the living Christian tradition, and therefore it is first and foremost the argument of the church about the good that constitutes its tradition rather than the argument of the academy.

I humbly suggest that the “gathering church” ecclesiology of my own Baptist tradition has a helpful way of making ecclesiological sense of how the academy has a place in the church’s contestation of the Christian tradition. In this tradition what it is that makes a community a church is not its identity with its bishop (though Baptist churches have their own way of doing oversight), nor is it the right preaching of the word and right administration of the sacraments (though, hopefully, we do that, too). Rather, the church is the community in which two or three or more are gathered in order to bring their life together under the rule of Christ. That is church proper, but the same principle extends an ecclesiality to gatherings of Christians beyond the local church for the purposes of bringing their extra-ecclesial communal life under the rule of Christ. The late Mennonite theologian John Howard Yoder from the broader free church tradition to which Baptists also belong thought this made good sense of what happened beyond the local church in ecumenical assemblies. In The Royal Priesthood he wrote, “This view gives more, not less, weight to ecumenical gatherings. The ‘high’ views of ordered churchdom can legitimate the worship of a General Assembly or a study conference only by stretching the rules, for its rules do not foresee ad hoc ‘churches’; only thoroughgoing congregationalism fulfills its hopes and definities whenever and wherever it sees ‘church’ happen.” This sort of extra-ecclesial expression of church “happens,” I think, not only in ecumenical assemblies but also in the community of the Christian academy to the extent that members of an academic community are seeking to bring their life together as Christian academics under the rule of Christ. So there’s a sense in which the church to which the academy witnesses is “happening” within the Christian academy—in the faculty senate, in faculty committee work, in cross-disciplinary faculty collaboration, in discussions and debates across the table in the faculty dining room, as well as in faculty relations with students.

The Christian academic also has a distinctive voice of witness within the church proper in its contestation of the Christian tradition. Again, I point to a Baptist perspective on how this happens within the community gathered to bring its life under the rule of Christ to suggest how this might work. Many of you are familiar with the statement on “Re-envisioning Baptist Identity: A Manifesto for Baptist Communities in North America” issued in 1997 by my fellow panelist Philip Thompson and Beth Newman of our conference, along with others. This “Baptist Manifesto,” as it came to be known, functioned as a sort of Barmen Declaration for Baptists who resisted the pull toward the perilous ideological polarities of the denominational controversy then raging in the Southern Baptist Convention. The first of the Manifesto’s five affirmations regarding the nature of freedom, faithfulness, and community was this:

We affirm Bible Study in reading communities rather than relying on private interpretation or supposed ‘scientific’ objectivity....We thus affirm an open and orderly process whereby faithful communities deliberate together over the Scriptures with sisters and brothers of the faith, excluding no light from any source. When all exercise their gifts and callings, when every voice is heard and weighed, when no one is silenced or privileged, the Spirit leads communities to read wisely and to practice faithfully the direction of the gospel.

Every academic and professional discipline of the Christian academy is a potential source of the light that should not be excluded by the church in its deliberation over the Scriptures, which is another way of speaking of the church’s contestation of the good that constitutes its tradition. And every Christian academic who exercises his or her gift and calling is a voice within the church that the church must hear and weigh and not silence. Along the same lines, Paul Fiddes of our conference has written in his book Tracks and Traces, which is available in our book display, about what it means for the whole congregation to seek together the mind of Christ in what British Baptists call “church meeting”: “Upon the whole people in covenant there lies the responsibility of finding a common mind, of coming to an agreement about the way of Christ for them in life, worship and mission. But they cannot do so unless they use the resources that God has given them.” While Professor Fiddes mentioned as specific examples among those resources the church’s pastor, deacons, and elders, these resources also include Christian academics in their academic witness within the church.

As a theologian teaching in a university-related graduate-professional school of divinity that prepares students to exercise ministerial leadership in the church, I have some more obvious ways of bearing academic witness within the church. Besides educating theologically the future ministers of the church, I do frequent preaching and teaching in local churches and do some writing for general ecclesial readerships in which I “translate” my other published scholarship in academic theology for lay members of the church. But Christian academics in all other university disciplines will have their own ways of bearing a distinctive witness within the church. Each field or profession has a potential witness to make in light of core Christian convictions about creation, the incarnation in which the divine embraces creation, and the sacramental nature of a creation-affirming, incarnational spirituality. All fields of academic inquiry and professional practice have light to offer the church in its contestation of the Christian tradition, for they all deal with dimensions of creation—God’s good creation, and God’s good creation gone awry. The witness of the academy is to offer this light within the community of the church in its various expressions, trusting that the church will neither exclude the light that comes from the source of the academy nor silence the voices of those who offer this light. May it be so.
Posted by Steven R. Harmon at 8:50 AM