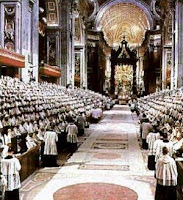 This week in the Ecumenical Theology course I'm teaching at Lutheran Theological Southern Seminary, we continued our survey of the historical development of the modern ecumenical movement by discussing the ecumenical revolution wrought by the commitment of the Catholic Church to participation in the ecumenical movement as expressed in the decisions and documents of the Second Vatican Council (1962-1965). Our discussion was rooted in a close reading of two key Catholic ecumenical texts: the Vatican II Decree on Ecumenism Unitatis Redintegratio ("The Repair of Unity") issued in 1965 and John Paul II's 1995 papal encyclical on ecumenism Ut Unum Sint ("That They May Be One"). These documents are must reading for an accurate understanding of Catholic perspectives on non-Catholic Christian communions, Catholic perspectives on the ecumenical movement, and more recent Catholic attempts to clarify these matters for the Catholic faithful.

Our attention to the "repair of unity" and the correction of false stereotypes of other Christians and their churches could be considered as a form of penitential discipline for Ash Wednesday and the beginning of Lent, a connection underscored by a block schedule in which half the class precedes the weekly Eucharistic service and half the class follows chapel--which this week featured the imposition of ashes, prefaced by a litany of confession that included this prayer: "For all false judgments, for uncharitable thoughts toward our neighbors, and for our prejudice and contempt toward those who differ from us, / Accept our repentance, O Lord, for your mercy is great." Amen.