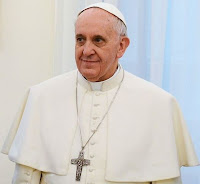 Catching up on providing links to things of interest to followers of Ecclesial Theology after time away lecturing in Pennsylvania and presenting at an academic conference in South Carolina (and time away from blogging preparing for and catching up from said events):

On the drive home to Boiling Springs, NC from the airport in Charlotte on March 13, I heard on NPR the news of the billowing of white smoke in St. Peter's Square. By the time I made it to my office to watch coverage online of the announcement of the conclave's election of Jorge Mario Cardinal Bergoglio and his presentation as Pope Francis, I had been contacted by a reporter from a local newspaper, the Shelby Star, and provided a telephone interview on the way to church for midweek services. A quote from that interview appears in this story (though I'm pretty sure I said "that’s reflected in the choice of St. Francis [as the source of his papal name], as in St. Francis of Assisi" rather than the construction that appears in the article).

On Tuesday of this week I granted an interview to Associated Baptist Press for a story on Baptist responses to the installation of Pope Francis, quotes from which appear in the hyperlinked article.

Wednesday Associated Baptist Press published on the ABPnews Blog my post "Pope Francis and the Baptists" summarizing my initial reflections on the implications for Baptists of the beginning of Pope Francis' pontificate.

Beyond the thoughts articulated in the stories and post linked above, as a Baptist ecumenical theologian I'm delighted by the discourse Pope Francis delivered to the representatives of various Christian communions and other religions who attended his installation mass. This discourse echoes the very best features (from my non-Catholic standpoint) of the Decree on Ecumenism Unitatis Redintegratio from Vatican II, the encyclical on commitment to ecumenism Ut Unum Sint from John Paul II, and the statements on "The Church and non-Christians" in the Catechism of the Catholic Church (sections 839-45). The latter is in my opinion one of the best concise statements on the relation of Christianity to non-Christian religions around, and I have my Christian Theology students read it when we discuss the relation of Christianity to non-Christian religions under the category of "general revelation." 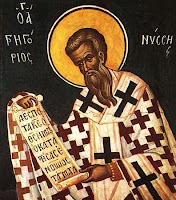 Now for the "and other things" part of this post: On March 9 I posted this Facebook status update in honor of the feast day of St. Gregory of Nyssa, whose thought was a major subject of my doctoral dissertation (revised as my first book Every Knee Should Bow: Biblical Rationals for Universal Salvation in Early Christian Thought):

No one who has given thought to the way we talk about God can adequately grasp the terms pertaining to God. ‘Mother,’ for example, is mentioned (Song of Solomon 3:11) instead of ‘father.’ Both terms mean the same thing, because there is neither male nor female in God.” -- St. Gregory of Nyssa (d. ca. 395), whose feast day is celebrated today in some Christian calendars. (Didn't expect that one from one of the church fathers, did you?)

British Baptist theologian Stephen Holmes of the faculty of The University of St. Andrews (UK) saw my status update, which inspired him to look up the original source of the quote and then post on his blog Shored Fragments his own reflections "On Mothering Sunday: Gregory of Nyssa on calling God 'mother'," which led to a follow-up post "On the Divine Names." (Mothering Sunday, for those who live on the North American side of the Atlantic, is the equivalent of Mother's Day in the U.S. but celebrated on the fourth Sunday in Lent.)
Posted by Steven R. Harmon at 12:22 PM