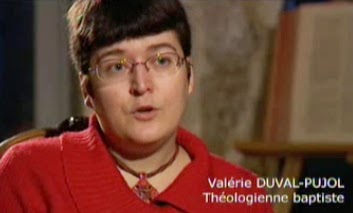 Today the Extraordinary Synod on the Family convened by Pope Francis concludes the first week of its two-week gathering at the Vatican. The synod is intended to be representative of the universal church: among the 253 men and women from five continents participating in the synod are not only Catholic clerical representatives, including 114 presidents of Catholic bishops' conferences, 13 heads of the Eastern Catholic Churches, and 25 heads of divisions of the Roman Curia among Catholic clerical representatives, but also laypersons--including 13 married couples and 16 experts in various fields germane to the matters under discussion--as well as 8 "fraternal delegates." representing non-Catholic traditions. Among these, Valérie Duval-Poujol, a professor of biblical exegesis at the Catholic Institute of Paris, France, is representing the Baptist World Alliance and is the only woman among the eight fraternal delegates to the synod. On Friday, October 10, she gave an address to the synod. A transcript of her address appears on the web site of the Fédération des Églises Évangéliques Baptistes de France (en Français). Earlier this week she was interviewed on Vatican Radio (audio also en Français).

Prof. Duval-Poujol, whose academic specialty is Septuagintal studies, serves as President of the Ecumenical Commission of the Protestant Federation of France and is a member of the Baptist delegation to conversations between the BWA and the World Methodist Council. An interview with Duval-Poujol about her role as a fraternal delegate to the synod appears on the web site of the Protestant Federation of France (print; also en Français). (In the course of the interview she also mentions the work of an ongoing national bilateral dialogue between Baptists and Catholics in France that has produced several significant reports on their work over the past two decades, including most recently a document summarizing their conversations on Mary.)

(Many thanks to Jane Stranz, a French Reformed pastor who coordinates ecumenical relations on the staff of the Fédération protestante de France, for making me aware of Prof. Duval-Poujol's participation in the synod via Twitter and Facebook contacts.)

Update: A YouTube clip is available from a press conference in which Valérie Duval-Poujol summarizes (in French) her address to the synod, beginning at 14:58 in the clip. After she speaks, a translator summarizes her remarks to the press corps in English.

Update #2: Jane Stranz has posted as a Facebook note an English translation of the text of Prof. Duval-Poujol's address to the synod on behalf of the Baptist World Alliance.
Posted by Steven R. Harmon at 2:50 PM