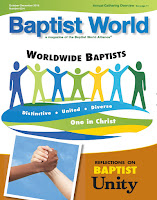 The new issue of Baptist World, the magazine of the Baptist World Alliance, includes my article "Real Baptists Pursue Church Unity" (vol. 63, no. 4, October-December 2016, pp. 9-10). The article is part of a feature section of articles on Baptists and unity, with other contributions by John Briggs, Elizabeth Newman, Ross Clifford, and Frank Rees and several news articles reporting on various regional and national expressions of Baptist involvement in the pursuit of Christian unity. The issue is available online; an excerpt from the beginning of the article follows:

The experiences of many Baptists and the impressions of many of their external observers run counter to the assertion made by this article’s title. Baptists have their origins in ecclesial division, and their subsequent history is marked by ever-increasing intra-Baptist divisions. Division is certainly a DNA sequence in the genetic code of “real Baptists.” Yet intertwined with it are genetic markers of an impulse toward ecclesial unity, and Baptists are being “real Baptists” when they allow that impulse to move them toward the full participation in the life of the Triune God and in the life of the body of Christ that Jesus prayed would mark his followers: “that they may be one, as we are one” (John 17:22 NRSV)....(read the full article and other articles in this issue here)
Posted by Steven R. Harmon at 10:32 AM