Baptist "Receptive Ecumenism" in the Evangelical Baptist Church of Georgia 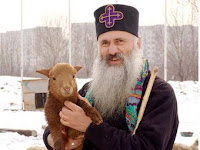 Yesterday evening I had the privilege of dining with Archbishop Malkhaz Songulashvili of the Evangelical Baptist Church of Georgia (yes, they have an archbishop--more on that below) at the Eagle and Child Pub in Oxford (the pub where C. S. Lewis, J. R. R. Tolkien, and other members of the "Inklings" literary discussion group met regularly). Archbishop Songulashvili is in Oxford for a couple of months of study and writing, and my friend Curtis Freeman (director of the Baptist House of Studies at Duke Divinity School in Durham, North Carolina) ran into him there earlier in the day and arranged for us to have what proved to be a most fascinating and rewarding dinner conversation.

Earlier this year I delivered the 2010 Lourdes College Ecumenical Lecture on the theme "How Baptists Receive the Gifts of Catholics and Other Christians," which was subsequently published under that title in Ecumenical Trends vol. 39, no. 6 (June 2010), pp. 11/81-5/85. The lecture/article included this paragraph calling attention to the Evangelical Baptist Church of Georgia as an example of Baptist receptive ecumenism that defies Baptist stereotypes:

The congregations of the Evangelical Baptist Church of Georgia represent a fascinating case study in Baptist receptive ecumenism that includes striking forms of liturgical as well as ecclesiological reception. In a culture that is historically Eastern Orthodox, the Evangelical Baptist Church of Georgia has maintained “belief in believer’s baptism, autonomy of the local church, freedom of conscience and religious liberty,” while adopting an ecclesial structure that is a hybrid of congregational and episcopal governance with a threefold ministry of bishops, presbyters, and deacons. In this structure the local congregations are autonomous in relation to one another and to the structure of the Evangelical Baptist Church of Georgia, but they are presided over by a bishop, whose office is a “symbol of unity” with the “responsibility...to provide spiritual guidance to the whole church as prophet, preacher, and teacher of the Gospel.” The ministers of the Evangelical Baptist Church wear Orthodox vestments and employ the Orthodox use of the sign of the cross, incense, and icons in their worship services. The Church sponsors monastic orders for men and women and a school of iconography. As their archbishop puts it, they “technically should be considered a Reformed Orthodox Church. On the one hand,” he says, “we are committed to the principles of the European Radical Reformation, and on the other hand we hold to our own Orthodox legacy.” In other words, they have received the gifts of the Orthodox tradition and incorporated them into their Baptist pattern of faith and practice.

These aspects of ecumenical reception of gifts from the Eastern Orthodox tradition cannot be attributed merely to the influence of living in an Orthodox culture. They are the fruit of intentional ecumenical engagement between Georgian Baptists and their Orthodox neighbors, and it was not easy for these Baptists whose historical identity was formed in contradistinction to Orthodox identity to decide together to receive these gifts as a community.

Ecumenical reception was also not a one-way street, for the Orthodox Church in Georgia also identified gifts in the Baptist tradition which they believed would strengthen Orthodox faith and practice, including the importance of the proclamation of the word and the relation of baptism to the church's practice of making disciples.

Other Baptists and other Christians have much to learn from this little-known communion and its quest to embody the unity Christ wills for his church in this particular place. I look forward to reading the future publications by which Archbishop Songulashvili and others will document this fascinating and encouraging story.
Posted by Steven R. Harmon at 6:38 AM