Resources for the Week of Prayer for Christian Unity 2011 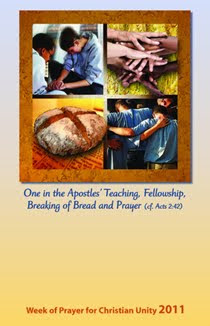 The beginning of the 2011 observance of the Week of Prayer for Christian Unity, January 18-25, is only 20 days from today. But it's not too late to plan for local, congregational, group, and individual observances of the most important practice of spiritual ecumenism: joining Jesus in his prayer that his followers "may be one...so that the world may believe" (John 17:21 NRSV).

The Graymoor Ecumenical & Interreligious Institute, a ministry of the Franciscan Friars of the Atonement, has provided an extensive array of resources for observing the 2011 Week of Prayer for Christian Unity online, along with ordering information for resources available for purchase.

Ecumenism Means You, Too: Ordinary Christians and the Quest for Christian Unity (available directly from Cascade Books or via Amazon) serves well as the basis for a group or individual study of grassroots ecumenical engagement in connection with the Week of Prayer for Christian Unity. (The publisher offers group discounts on orders of five copies or more if contacted by telephone or e-mail.)

Most importantly: remember to pray for the unity of the church--during the Week of Prayer for Christian Unity, and throughout the year!
Posted by Steven R. Harmon at 8:38 AM