3 recommendations for B/baptist bibliophiles for 2013 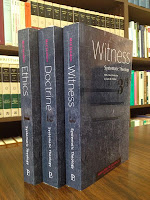 A version of this post appeared on the ABPnews Blog.

In 1500 Dutch humanist and theologian Desiderius Erasmus wrote to a friend, “When I get a little money I buy books; and if any is left I buy food and clothes.” Thanks to gift cards from Amazon or Barnes and Noble and/or undesignated gifts of Christmas cash, many Baptist (and baptist) bibliophiles among the readers of Ecclesial Theology are currently in a somewhat more comfortable position for expanding their libraries without resorting to such ascetic extremes.

How to spend this windfall? Here are three recommendations of books published in the last half of 2012 that are worth reading in 2013. (I’ve linked each title to the book’s page on its publisher’s web site; readers can also easily find them via amazon.com, barnesandnoble.com, and other online booksellers.)

James Wm. McClendon, Jr., Systematic Theology, 3 vols., reprint edition with new introduction by Curtis W. Freeman (Waco, Tex.: Baylor University Press, 2012). The three-volume Systematic Theology by James Wm. McClendon, Jr. (1924-2000), published originally by Abingdon Press 1986-2000, is the most significant such work by a Baptist theologian to date. No Baptist minister or theologically-interested Baptist layperson should go without reading it. In hisSystematic Theology McClendon listened deeply to the Baptist tradition, the larger free church tradition (“baptists” with a lower-case “b” in McClendon’s usage), and to the tradition of the whole church to which Baptists and baptists belong on the way to offering a creative and compelling articulation of the ethics (volume 1), doctrine (volume 2), and witness (volume 3) of this concrete ecclesial community of reference. It’s the first thing I mention whenever students and ministers ask me what I think they ought to read. Baylor University Press has now re-issued McClendon’sSystematic Theology with a helpful 32-page introduction to McClendon’s thought by Curtis W. Freeman included at the beginning of each of the three volumes. I’m using the Baylor University Press edition of the Doctrine volume as a required core text in the Spring 2013 offerings of my Introduction to Christian Theology I and II courses at Gardner-Webb University School of Divinity.
E. Glenn Hinson, A Miracle of Grace: An Autobiography (Macon, Ga.: Mercer University Press, 2012). In my experience, theologically-reflective autobiography serves well as devotional literature. A Miracle of Grace by E. Glenn Hinson, Emeritus Professor of Spirituality and John Loftis Professor of Church History at Baptist Theological Seminary at Richmond and professor of church history at The Southern Baptist Theological Seminary for over three decades, fulfilled that function for me in a deeply meaningful way. As a Baptist theologian working in patristic theology and ecumenical theology I was keenly interested in Hinson’s account of those dimensions of his scholarly career. But as I devoured the book it occurred to me that features of Hinson’s journey are parallel to and instructive for three needs that have emerged in the shared journey of the Cooperative Baptist Fellowship, the ecclesial community with which both Hinson and I identify: (1) the early need to resist the sort of fundamentalism that came to dominate the Southern Baptist Convention; (2) the need to move beyond an identity defined by anti-fundamentalism and the maintenance of denominational distinctiveness toward a deeper spirituality; and (3) the need to embrace the whole church, past and present, as the source of the resources Baptist communities require for moving toward and sustaining this deeper spirituality. As a Baptist who has found many such resources in the Anglican tradition, I had special appreciation for this passage from the book:
A lot of Baptists may fail to recognize it, but the Church of England is our mother church by way of the Puritans. A Baptist joining an Anglican or Episcopal church is going home….Each year since January 2004, I have delivered a series of four or five lectures to the Adult Forum of Christ Church Cathedral [in Lexington, Kentucky]. Each time I lectured, I tried to remain for the morning Eucharist, and I must confess that returning to a Baptist congregation left me feeling unfulfilled spiritually. Baptists speak about the Bible a great deal, but they do not saturate their worship with it in the same way the Anglican liturgy does! I understand well why some of my most discerning friends have become Episcopalians (pp. 355-56).
One of the lessons of Hinson’s book is that no Baptist has to become Episcopalian—or Orthodox, Catholic, or any other Christian tradition—in order to find these resources, for as Hinson insists, Baptists belong to the whole church, and the whole church belongs to Baptists.
Jeffrey W. Cary, Free Churches and the Body of Christ: Authority, Unity, and Truthfulness (Free Church, Catholic Tradition; Eugene, Ore.: Cascade Books, 2012). Jeffrey Cary is not a Baptist, but as a Church of Christ theologian who serves as Assistant Professor of Theology at Lubbock Christian University in Lubbock, Texas, he is a McClendon lower-case “b” baptist who is appreciative of McClendon’s articulation of the baptist vision and seeks the renewal of his own ecclesial community by embracing the resources of the larger Christian tradition in ways I imagine Hinson would applaud. The first volume in the new Free Church, Catholic Tradition series launched by Cascade Books, Cary’s book is a revision of his doctoral dissertation at Baylor University. I provided this commendation for the back cover of Cary’s book and offer it to readers of the ABPnews Blog as well: “No advocate or critic of the current quest in the free church tradition for a fuller catholicity and deeper commitment to the visible unity of the church catholic should proceed further in reflecting on this movement without reading, marking, and inwardly digesting this agenda-setting book.”
Posted by Steven R. Harmon at 2:08 PM