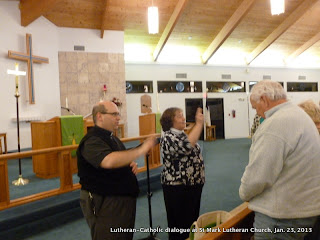 In my book Ecumenism Means You, Too: Ordinary Christians and the Quest for Christian Unity (Cascade books, 2010), I mention the reports and agreed statements issued by bilateral ecumenical dialogues as a neglected resource for learning more about other Christian denominations in local church programs of Christian education: "If your own denomination has been in this kind of official dialogue with other churches, studying and discussing these report would be an ideal way to learn about other denominations and their relationship to your own tradition" (pp. 63-64). Yesterday evening members of St. Mark by the Sea Lutheran Church in Palm Coast, Florida and Santa Maria del Mar Catholic Church in Flagler Beach, Florida met to do just that together in an event hosted by St. Mark by the Sea Lutheran Church: "The Hope for Eternal Life: Lutheran-Catholic Dialogue." Participants read and discussed "The Hope of Eternal Life: Common Statement of the Eleventh Round of the U.S. Lutheran-Roman Catholic Dialogue" along with an article by Jeffrey Gros in the Journal of Ecumenical Studies summarizing and commenting on that dialogue. (The web site of Flagler Churches Together in Prayer and Song--which provides links to a number of helpful resources for grassroots ecumenical engagement--has also posted a photo gallery from other events related to their local observance of the Week of Prayer for Christian Unity.)

May other churches go and do likewise!
Posted by Steven R. Harmon at 10:35 AM