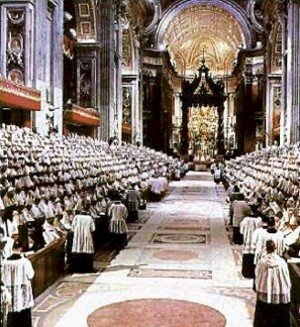 Today is the fiftieth anniversary of Unitatis Redintegratio (Latin for "the repair of unity"), the Decree on Ecumenism issued by the Second Vatican Council on November 21, 1964. Here's a brief summary of the significance of this decree from a previous publication:

After acknowledging that "division openly contradicts the will of Christ, scandalizes the world, and damages the holy cause of preaching to Gospel to every creature," the decree recognizes the modern ecumenical movement that began among Protestants as nothing less than the work of God....This Decree on Ecumenism was the major twentieth-century turning point in the progress of the quest for Christian unity. It acknowledged that all the churches, including the Roman Catholic Church, share responsibility for their contributions to the present divisions. It explicitly affirmed that non-Catholic Christians experience the grace of God through the presence of Christ and the work of the Spirit in Christian communities that are outside the Roman Catholic Church....The decree called for all Catholics, clergy and laity alike, to learn about and learn from the distinctive gifts that the other denominational traditions contribute to the body of Christ. It irrevocably committed the Roman Catholic Church to participation in the various forms of the worldwide ecumenical movement, and thus it also opened the way for many other denominations to follow through on their own ecumenical convictions by entering into formal dialogue with Roman Catholicism. -- From Steven R. Harmon, Ecumenism Means You, Too: Ordinary Christians and the Quest for Christian Unity (Eugene, Ore.: Cascade Books, 2010)

Various commemorations of this anniversary are underway and forthcoming. I'm looking forward to speaking at one such event, a symposium on Unitatis Redintegratio at Creighton University on February 7, 2015, at which I will offer reflections on the significance of this document and its implications for the ecumenical future along with Fr. John Crossin of the United States Conference of Catholic Bishops and William Rusch, former executive director of the Faith and Order Commission of the National Council of Churches (USA). In the meantime, I hope readers of Ecclesial Theology will join me in marking today's anniversary by praying for the unity of Christ's church and reading the text of the Decree on Ecumenism, which makes for edifying devotional reading for all Christians.
Posted by Steven R. Harmon at 9:28 AM No comments: