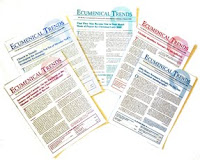 The current issue of the journal Ecumenical Trends published by the Graymoor Ecumenical and Interreligious Institute features an article titled "Baptist-Catholic Dialogue Today" by David Carter, a British Methodist church historian and member of the joint commissions of the British Methodist-Catholic dialogue and the international Catholic Church-World Methodist Council dialogue (Ecumenical Trends 44, no. 7 [July/August 2015]: 6/102-13/109). The article surveys the context and contributions of the second series of international conversations between the Baptist World Alliance and the Catholic Church that took place from 2006 through 2010 and issued the joint report "The Word of God in the Life of the Church."

This issue of Ecumenical Trends also includes Edward C. Andercheck's article "Methodist-Catholic Dialogue: Ut Unum Sint and Geoffrey Wainwright's Response" (1/97-5/101, 14/110). While both articles and the issue in which they appear are available online only to subscribers, a subscription to either the print ($30 per year, including digital access) or digital-only version of the journal ($15) includes online access to the past two years of back issues.
Posted by Steven R. Harmon at 2:19 PM No comments:

Members of the Gardner-Webb University faculty have published several books in various disciplines of religious and theological studies during 2014 and 2015.

Oxford University Press has published Founding Sins: How a Group of Antislavery Radicals Fought to Put Christ into the Constitution by Joseph Moore, Assistant Professor of History in the Department of Social Sciences at Gardner-Webb. The book will be released in hardcover on September 15, but its Kindle edition is available now. According to the book overview on the Oxford University Press, Founding Sins "argues that America's original religious right, the Covenanters, shatter the conservative logic that America was founded as a Christian nation." Here's the full book description:

The Covenanters, now mostly forgotten, were America's first Christian nationalists. For two centuries they decried the fact that, in their view, the United States was not a Christian nation because slavery was in the Constitution but Jesus was not. Having once ruled Scotland as a part of a Presbyterian coalition, they longed to convert America to a holy Calvinist vision in which church and state united to form a godly body politic. Their unique story has largely been submerged beneath the histories of the events in which they participated and the famous figures with whom they interacted, making them the most important religious movement in American history that no one remembers.

Despite being one of North America's smallest religious sects, the Covenanters found their way into every major revolt. They were God's rebels--just as likely to be Patriots against Britain as they were to be Whiskey Rebels against the federal government. As the nation's earliest and most avowed abolitionists, they had a significant influence on the fight for emancipation. In Founding Sins, Joseph S. Moore examines this forgotten history, and explores how Covenanters profoundly shaped American's understandings of the separation of church and state.

While modern arguments about America's Christian founding usually come from the right, the Covenanters have a more complicated legacy. They fought for an explicitly Christian America in the midst of what they saw as a secular state that failed the test of Christian nationhood. But they did so on behalf of a cause--abolition--that is traditionally associated with the left. Though their attempts to insert God into the Constitution ultimately failed, Covenanters set the acceptable limits for religion in politics for generations to come.

Scott Shauf compares the portrayal of the divine in Acts with portrayals of the divine in other ancient historiographical writings, the latter including Jewish and wider Greco-Roman historiographical traditions. The divine may be represented as a single deity (in Judaism) or many (in Greek and Roman traditions) and also includes representations of angels, God’s spirit, Jesus as a divine figure, or forces with divine status such as fate, chance, and providence. Shauf’s particular interest is in how the divine is represented as involved in history, through themes including the nature of divine retribution, the partiality or impartiality of the divine toward different sets of people, and the portrayal of divine control over seemingly purely natural and human events. Acts is shown to be engaging historiographical traditions of the author’s own day but also contributing unique historiographical perspectives. The way history is written in Acts and in the other writings is shown to be intimately tied to the understanding of the role of the divine in history.

In June 2014 Pickwick Publications released The Topos of Divine Testimony in Luke-Acts by James R. McConnell, Jr., Assistant Professor of New Testament Interpretation in the School of Divinity at Gardner-Webb. Here's the description of the book on the publisher's site:

In this study James McConnell addresses the concept of authoritative testimony in Luke-Acts. Specifically, he argues that particular elements in the narrative of Luke-Acts can be understood as instances of the topos of divine testimony through utterances and deeds, considered in some ancient rhetorical handbooks to be the most authoritative form of testimony when seeking to persuade an audience. McConnell claims the gods' testimony was used in ancient law courts and political speeches to persuade a judge of a defendant's guilt or innocence, and in attempts in public forums to convince others of a particular course of action. Similarly, the topos is used in ancient narratives and biographies to legitimate certain characters and discredit others. The instances of the topos of God's speech (both oral and through OT citations) and deeds in Luke-Acts are functioning in the same way.

In March 2014 Wipf and Stock issued How to Read the Bible Without Losing Your Mind: A Truth-Seeker's Guide to Making Sense of Scripture by Kent Blevins, Professor of Religious Studies in the Department of Religious Studies and Philosophy at Gardner-Webb. From the book description:

Does reading the Bible sometimes leave you confused? Do you have difficulty seeing the relevance of the Bible to modern concerns or to important issues in your life? Do you believe Bible reading and intellectual inquiry are mutually exclusive? This book explores how the Bible can serve as a resource for discovering truth. It provides a method that accepts and incorporates the knowledge gained from modern scholarship while also recognizing that truth-discovery is a personal, multifaceted journey. It honors the integrity of Scripture while remaining open to insight from additional truth-sources. In exploring what we mean when we speak of the Bible's authority, it is honest about the challenges presented to modern readers by the cultural chasm separating the biblical writers from today's world. How to Read the Bible Without Losing Your Mind shows how the Bible can be read with full engagement of both mind and heart.

Gardner-Webb alumni have also been making notable contributions to scholarship in religious and theological studies. In November 2015 Fortress Press will release Making Love with Scripture: Why the Bible Doesn’t Mean How You Think It Means by 2001 Department of Religious Studies and Philosophy graduate Jacob D. Myers, newly appointed as Assistant Professor of Homiletics at Columbia Theological Seminary in Decatur, Georgia. Fortress Press provides this description:

Nothing has been more contentious in the history of Christianity than the meaning of the Bible, and that debate continues today. Arguments over Scripture have divided denominations, churches, and families, and these squabbles have led many to abandon the faith altogether. Jacob D. Myers, a rising young scholar, has a solution to the problem with Scripture. The instability of the Bible’s meaning, he argues, is not a weakness but a strength, and it can benefit conservatives and liberals alike.

In June 2013 Oxford University Press published Sacred Scripture, Sacred War: The Bible and the American Revolution by James P. Byrd, who graduated from Gardner-Webb in 1988 with a double major in Religious Studies and English and is now Associate Professor of American Religious History and Associate Dean for Graduate Education and Research at Vanderbilt University Divinity School in Nashville, Tennessee. From the OUP site:

On January 17, 1776, one week after Thomas Paine published his incendiary pamphlet Common Sense, Connecticut minister Samuel Sherwood preached an equally patriotic sermon. "God Almighty, with all the powers of heaven, are on our side," Sherwood said, voicing a sacred justification for war that Americans would invoke repeatedly throughout the struggle for independence.

In Sacred Scripture, Sacred War, James Byrd offers the first comprehensive analysis of how American revolutionaries defended their patriotic convictions through scripture. Byrd shows that the Bible was a key text of the American Revolution. Indeed, many colonists saw the Bible as primarily a book about war. They viewed God as not merely sanctioning violence but actively participating in combat, playing a decisive role on the battlefield. When war came, preachers and patriots alike turned to scripture not only for solace but for exhortations to fight. Such scripture helped amateur soldiers overcome their natural aversion to killing, conferred on those who died for the Revolution the halo of martyrdom, and gave Americans a sense of the divine providence of their cause. Many histories of the Revolution have noted the connection between religion and war, but Sacred Scripture, Sacred War is the first to provide a detailed analysis of specific biblical texts and how they were used, especially in making the patriotic case for war. Combing through more than 500 wartime sources, which include more than 17,000 biblical citations, Byrd shows precisely how the Bible shaped American war, and how war in turn shaped Americans' view of the Bible.

Also in 2013, Faithlab published Queer Lessons for Churches on the Straight and Narrow: What All Christians Can Learn from LGBTQ Lives by Cody J. Sanders, a 2005 graduate of Gardner-Webb in Religious Studies and Psychology who now serves as Pastor of Old Cambridge Baptist Church in Cambridge, Massachusetts. Here's the book description from Amazon.com

Winner of the National Bronze Medal for Gay/Lesbian/Bi/Trans Non-Fiction in the 2014 Independent Publisher Book Awards, Queer Lessons for Churches on the Straight and Narrow is about changing the questions we ask about sexuality, gender identity, and faith. Sanders helps us imagine new pathways into old conversations by shifting our attitude from one of suspicious scrutiny toward LGBTQ people to one of compassionate curiosity. Less concerned with answering questions, it aims to cultivate our imagination for asking new questions. Sanders asks, "What can all Christians learn from LGBTQ people that will enhance our lives and strengthen our communities of faith?" Lessons are offered on the themes of relationship, community, faithfulness, love, violence, and forgiveness.
Posted by Steven R. Harmon at 11:14 AM No comments: