British Baptist minister Andy Goodliff includes my new book Baptist Identity and the Ecumenical Future: Story, Tradition, and the Recovery of Community among the 2016 book releases he's anticipating in his blog post "Some Book Delights forthcoming for 2016."

Further Conversations between Anglicans and Baptists 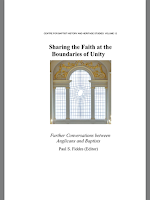 Representatives of the Baptist Union of Great Britain and the Church of England met from 2011 through 2014 for a second series of ecumenical conversations between these two British ecclesial communions, following up on a previous series of conversations held from 1992 through 2005. In 2015 the joint commission to the second series of conversations published its report: Sharing the Faith at the Boundaries of Unity: Further Conversations between Anglicans and Baptists, ed. Paul S. Fiddes (Centre for Baptist History and Heritage Studies, vol. 12; Oxford: Regent's Park College, 2015). The 148-page report is now available online as a downloadable PDF (click on the hyperlinked title above). It builds upon both the report from the first series of conversations, Pushing at the Boundaries of Unity: Anglicans and Baptists in Conversation (London: Church House Publishing, 2005), and the report from an international dialogue between the Anglican Communion and the Baptist World Alliance, Conversations Around the World 2000-2005: The Report of the International Conversations between the Anglican Communion and the Baptist World Alliance (London: Anglican Communion Office, 2005). Both of those book-length reports likewise are available online as downloadable PDFs (click on hyperlinked titles).

This paragraph from the introduction to the new report provides a sense of its unique approach:

Ecumenical reports frequently refer to 'conversations' between members of different communions. However, what they offer is not an account of the actual conversations themselves but a distilled account of their conclusions. Readers can often deduce what the cut and thrust of debate must have been that lies behind the 'agreed statement', but for the most part they have to guess at it. This report is different, deliberately. Just as the previous report 'pushed at the boundaries' that inhibit unity, this one also reaches beyond, even breaks, the normal framework of reports. It 'pushes the envelope' of a report in aiming to give the reader a taste of what the participants said to each other. In so doing it seeks to give insight into the life and ethos of each communion, rather than simply repeating established viewpoints (pp. 2-3).

I'm grateful for the report's reference to my book Towards Baptist Catholicity: Essays on Tradition and the Baptist Vision (Studies in Baptist History and Thought, vol. 27; Milton Keynes, UK: Paternoster, 2006) and to the report from the 2000-2005 Anglican-Baptist international conversations, for which I served as a member of the Baptist delegation for its North American phase.
Posted by Steven R. Harmon at 9:15 AM No comments: