David Rathel, a Ph.D. student in theology at the University of St. Andrews in Scotland, has posted a bibliography of publications connected with "Baptist Catholicity" on his blog "David Rathel's Research Page." It includes my books Towards Baptist Catholicity: Essays on Tradition and the Baptist Vision and Baptist Identity and the Ecumenical Future: Story, Tradition, and the Recovery of Community, as well as a chapter on "'Catholic Baptists' and the New Horizon of Tradition in Baptist Theology" that I contributed to the book New Horizons in Theology (published in the series of annual volumes of the College Theology Society).

Interested in Towards Baptist Catholicity or Baptist Identity and the Ecumenical Future? Click on the hyperlinked titles to order them from the publishers, or follow this link to my Amazon author page.
Posted by Steven R. Harmon at 2:05 PM No comments:

On Trump, violence, and ecclesial complicity

Yesterday's crossing of a line by a presidential candidate, as egregious as it was, is symptomatic of a pervasive malady afflicting the American church as well as its cultural context: credence in the "myth of redemptive violence" (Walter Wink's coinage). It's time to declare the renunciation of all forms of violence and the embrace of the nonviolent way of Jesus a matter of status confessionis for the church (a state of affairs in which the fundamental essence of the Gospel the church confesses is at stake).

This will include forsaking the Niebuhrian realism that has been the received ecclesial justification for American foreign policy since the 1950s, in the Cold War and in the "war on terror." Its pervasive influence was evidenced in the 2008 presidential election campaigns, with both John McCain and Barak Obama crediting Niebuhr's influence on their political philosophies. It can be argued that Niebuhrian realism, offered to the polis by the church, undergirded both the invasion of Iraq under President Bush and the escalation of drone strikes under President Obama (I assert this as someone who voted enthusiastically for Obama twice and continues to admire him and his presidency).

All this is to say that as the church we must both denounce what happened yesterday in Wilmington, North Carolina, and repent of our complicity in the formation of a culture in which those words actually strike a chord with some Americans, so that as followers of Jesus Christ we might actively live into the shalom of the reign of God.
Posted by Steven R. Harmon at 11:46 AM 2 comments: 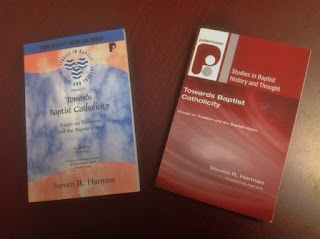 This month is the tenth anniversary of the release of my book Towards Baptist Catholicity: Essays on Tradition and the Baptist Vision in the series Studies in Baptist History and Thought, published in the UK by Paternoster and co-published in the USA by Wipf and Stock. I'm grateful that the book has continued to find new readers, and I'm gratified to hear from some of them that the book has transformed their understanding of what it means to be Baptist and helped them to embrace their Baptist heritage along with the larger Christian tradition. (Many thanks to David Wilhite for requiring his students at Baylor University's Truett Seminary to read Towards Baptist Catholicity in his Christian Texts and Traditions I course in the M.Div. core curriculum there.)

Interested in reading Towards Baptist Catholicity? Order from the publisher or via Amazon.

If you've read Towards Baptist Catholicity already, I hope you'll consider posting a review to Amazon and/or Goodreads.
Posted by Steven R. Harmon at 11:01 AM No comments: