The Pilgrim Church and the Ecumenical Future--lecture texts now online

Last month I delivered lectures on the theme "The Pilgrim Church and the Ecumenical Future" as the 2013 Robert K. Campbell Memorial Lectures on Christian Unity sponsored by the Lehigh County Conference of Churches and held on the campus of DeSales University near Allentown, Pennsylvania. The texts of these lectures are now available online (click on hyperlinked text). Lecture 1 is "A Pilgrim Church Theology, Discovered through Dialogue," and Lecture 2 is "Embodying the Story of Jesus: The Pilgrim Identity of the Body of Christ." The Campbell Lectures Archive on the Lehigh County Conference of Churches site includes texts of some of the other lectures delivered since 2001, though the lectures have been held annually since 1993.
Posted by Steven R. Harmon at 3:22 PM No comments:

The current issue of the magazine Baptist World published by the Baptist World Alliance (vol. 60, no. 2 [April-June 2013]) includes several articles related to themes of interest to readers of Ecclesial Theology--in particular, articles on "The Importance of a Fixed Liturgy" (pp. 8 and 10-11), a BWA-sponsored forum on violence against women held in conjunction with a session of the United Nations Commission on the Status of Women (p. 26), women serving in leadership roles in national and international denominational life (p. 27), BWA responses to the resignation of Pope Benedict XVI and the election of Pope Francis (p. 28), and a notice of a book by Baptist historian Paul Dekar on the Community of the Transfiguration, a monastic community in Australia connected with the Baptist Union of Victoria (p. 28). Yes, there are Baptist monks, and nuns, too--in addition to the Community of the Transfiguration, the Evangelical Baptist Church of Georgia (in Eastern Europe) has a women's monastic order, the Order of St. Nino, along with the New Desert Brothers order for men.
Posted by Steven R. Harmon at 11:44 AM No comments:

Trinitarian Soundings on the Triduum

Many thanks to Molly T. Marshall, President and Professor of Theology and Spiritual Formation at Central Baptist Theological Seminary in Shawnee, Kansas, for the kind mention of my musings on the theological significance of Holy Saturday posted here on Ecclesial Theology in her April 1 post titled "Resting Well" on her blog Trinitarian Soundings.
Posted by Steven R. Harmon at 1:27 PM No comments:


The April 2013 issue of the Baptist World Alliance electronic publication BWA Connect includes a column by Baptist World Alliance General Secretary Neville Callam in which he reflects on the Baptist tendency to ignore the tradition of biblical interpretation when interpreting the Bible, notes a Baptist project dedicated to the recovery of the tradition of Baptist biblical interpretation, and commends the extension of this tradition beyond Baptist beginnings to include patristic biblical interpretation. Callam points to a new resource published by the Faith and Order Commission of the World Council of Churches that provides access to the riches of patristic interpretation of the four Gospels as an example of how the earliest interpretations of Scripture after the New Testament serve as important resources for communities that seek to interpret and perform Scripture today. Since I devoted a chapter of my book Towards Baptist Catholicity: Essays on Tradition and the Baptist Vision to how Baptists might make use of patristic biblical interpretation in their contemporary readings of Scripture, I was gratified to see the BWA General Secretary commend this practice. Callam's BWA Connect column appears below.

Some Baptists have claimed to be "a people of the book." Often, this self-designation is meant to highlight the value we place on the Bible. In We Baptists, published by the BWA in 1999, the priority Baptists assign to the Bible is reflected in a number of ways. Take the following affirmation, for example:

Baptists believe that the Bible is both the true record of God's revelation to our world and the supreme written guide for our faith and practice today. Because it leads us to Jesus Christ the living Word, we speak of it as "the Word of God," and believe it was inspired by God's Spirit. [Baptists regard the Bible as] totally sufficient; that is, all teaching must be in harmony with the Scriptures, and all teaching must be tested by the Scriptures only.

What spurred me to consider again the disputable tag "a people of the book" was a fresh look at one of the many books published in 2009 when Baptists were marking their quadricentennial, the 400th anniversary of Baptist witness. In the introduction to The Acts of the Apostles: Four Centuries of Baptist Interpretation (Waco, Texas: Baylor University Press, 2009), the editors make a bold claim that should be taken seriously. This is what they say:

Baptists for the most part have shown little interest in recovering Baptist interpretation of Scripture. There are several reasons for this. For one, Baptists have historically spent more time debating the authority of Scripture than engaged in dialogue about what the Bible says, much less what our forebears said it says. For another, Baptists belong to a larger movement of Christians committed to restoring the New Testament church, an endeavor that leaves little room for sustained interest in the intervening and subsequent history of biblical interpretation.

If we believe the accusation is valid -- and it seems that way to me -- we may acknowledge that our churches need to pay more attention to the massive literary output of those who are committed to recovering interpretations of the biblical text, not least those who gave committed service as interpreters of the Bible over the past four centuries of Baptist history -- which is what the Baylor text attempts to do with respect to the Acts of the Apostles. Reading the book, we may be surprised at the wide diversity of hermeneutical approaches used by Baptists and the different conclusions they have drawn from reading a particular section of the Bible.

If we wish to extend this quest beyond Baptist boundaries and go back to the first few centuries of the church's life, much exists to aid this quest. See, for example, a brief and very accessible book, Reading the Gospels with the Early Church: A Guide (Geneva: WCC Publications, 2013), prepared by Tamara Grdzelidze and her colleagues in the Faith and Order movement of the World Council of Churches. In six short sections, passages from the New Testament are accompanied by brief comments offered respectively by John Chrysostom, Augustine of Hippo, Cyril of Jerusalem, Ambrose of Milan, Ephrem the Syrian, Origen, Pseudo-Macarius and Hippolytus. In each section, the biblical text and commentary are followed by a brief note about the commentators, recommendations for group work and a prayer.

This new guidebook reflects how, during the first 450 years of the church's life, significant biblical interpreters shared the conviction that the biblical text is "a revelation of the truth through the Holy Spirit in the Church." This does not mean, however, that the literary output of these interpreters did not manifest diversity and creativity resulting partly from the interpretive methods employed. While taking the Bible seriously, the interpreters were free to discover horizons of meaning and to develop perspectives on the text of Scripture that provided a rich tapestry that is as diverse as it is enriching.

Perhaps the ancient interpreters of the New Testament model for us how to agree on the essential biblical message while setting forth distinct, though not inconsistent, understandings of particular texts of Scripture. We should be able to do this without having to bear the pejorative labels some contemporary believers love to use to discredit others.

We should reasonably expect that Christians reading the Bible in the context of their communities of faith will continue to search for, and find, "more light and truth" from God's Word!

Another word on the "feast day" of Franz Bibfeldt

Lest there be any confusion: yesterday's post on the "feast day" of Franz Bibfeldt, coming as it did on April 1, was an April Fool's joke, in continuity with many such April 1 Bibfeldt observances connected with the University of Chicago Divinity School, which one can read about here and here.

I first discovered the Bibfeldt tradition when I happened across a copy of the faux Festschrift for Bibfeldt, The Unrelieved Paradox: Studies in the Theology of Franz Bibfeldt, ed. Martin E. Marty and Jerald C. Brauer (Grand Rapids, Mich.: William B. Eerdmans, 1994) in a Borders bookstore in Fort Worth, Texas. I found myself laughing aloud in the aisle several times and realized that I likely couldn't begin to explain to anyone else in the store why I found it so hilariously funny. (For what it's worth, my favorite title in the Bibfeldt bibliography is Vielleicht?, Bibfeldt's response to Karl Barth's Nein! to Emil Brunner on the possibility of natural theology, with his book Either/Or and/or Both/And a close second.)

Every now and then when one of my theology class sessions coincided with April 1, I would give in advance of that class meeting an off-the-syllabus assignment asking my students to do some independent research to see what they could learn about a theologian named Franz Bibfeldt, then debrief their findings during the April 1 session. A few students caught the joke before I revealed it.

The Unrelieved Paradox is now available in an "18th (or Perhaps 19th) Anniversary Revised Edition."
Posted by Steven R. Harmon at 11:57 PM No comments:

For the feast day of Franz Bibfeldt 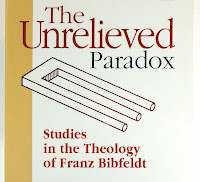 Today is celebrated as the feast day of theologian Franz Bibfeldt on the calendars of some Western churches, especially in the environs of Chicago, Illinois in the U.S.A. I remember fondly my delightful discovery of the thought of this theologian previously unknown to me when I stumbled across the Festschrift published in his honor in a Borders bookstore in Fort Worth, Texas sometime in the mid-1990s. In honor of Bibfeldt's feast day and in gratitude for his contributions to the development of Christian theology, I'm posting the collect "Of a Theologian and Teacher" from the Book of Common Prayer:

Related Post: Another word of the "feast day" of Franz Bibfeldt
Posted by Steven R. Harmon at 8:05 AM No comments: