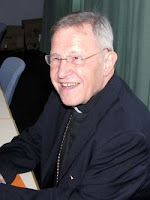 One of the personal highlights of my participation in the current series of international bilateral conversations between the Baptist World Alliance and the Pontifical Council for Promoting Christian Unity has been the session of last year's meetings in Rome in which Walter Cardinal Kasper participated, sharing with us his own perspectives on the successes, failures, and ongoing challenges of the ecumenical movement and candidly responding to our questions. Kasper, who recently retired as president of the PCPCU, echoed much of what he shared with us last December in a July 22 press interview given while a guest of honor at an assembly of the Lutheran World Federation in Stuttgart, Germany July 20-27. Below is a press release issued by Ecumenical News International (Geneva) summarizing the interview.

Stuttgart, Germany (ENI). The recently retired senior Vatican official responsible for ecumenical affairs has said his biggest regret during his tenure in Rome is that he did not achieve an agreement on a common communion with Protestants.

"Today, there is a lot of convergence. So, we got closer to each other but we could not achieve the final breakthrough. I regret it very much but you cannot push the issue," said Cardinal Walter Kasper, who retired on 1 July as president of the Pontifical Council for Promoting Christian Unity.

"The main thing that I did not achieve is the sharing of Holy Communion," Kasper told ENInews in an interview in Stuttgart, while attending, as a special guest, the 20-27 July assembly of the Lutheran World Federation.

Kasper, now 77, became president of the Pontifical Council for Promoting Christian Unity in 2001; he had served the previous two years as its secretary. Originally from Germany, Kasper is a former professor of theology in Münster and Tübingen, and was bishop of Stuttgart from 1989 to 1999.

Soon after he became secretary of the Vatican's unity council, Kasper took part in the signing on 31 October 1999, Reformation Day, of the "Joint Declaration on the Doctrine of Justification" between the Roman Catholic Church and the LWF. This aimed to overcome condemnations, dating back to the 16th century, between the papacy and reformer Martin Luther and his followers.

However, sharing in the Eucharist, or Holy Communion, the central Christian sacrament that commemorates Jesus' last meal with his disciples, remains a point of contention. Catholic teaching prevents Protestants in most situations receiving communion from Catholic priests, and says Catholics should not receive communion in Protestant churches.

"Of course, I regret it very much because I know the concrete problems in families, and between good friends and partners," said Kasper. "I know what these problems are but I cannot jump over the whole existing doctrine. It is a problem that still exists but I think we also achieved some things. Maybe not consensus but convergence."

Kasper's words echoed those of LWF president Mark S. Hanson from the United States, who earlier in the day told a media conference that the Lutheran commitment to ecumenism will not end until Lutherans can share the Eucharist with other churches.

"We must continue the dialogue about theological issues that still prevent us from communing together," said Hanson.

The LWF president had been asked if he could envisage a day when a married couple in which one partner was a Catholic and the other a Lutheran could share in communion together with the blessing of both churches. Hanson responded by saying that it is the lay people of the churches who are driving and sustaining these conversations, and he acknowledged the "grassroots ecumenism" that is alive among lay people.

"If Roman Catholics and Lutherans can feed the hungry together, wouldn't it be good if they could be fed at the Lord's Table together?" Hanson said.

Kasper said in an address to LWF assembly delegates, "In the last years, we have been harvesting the fruit of the dialogue. I was more than surprised to see such a rich harvest, and that we have achieved much more than we could even dream before. There has been no ecumenical winter."

Still, he acknowledged that there is an unfinished agenda and that this should be the reason to continue the search for unity. "We can no longer afford to stick to our differences," Kasper told delegates.

In his ENInews interview, the former Vatican official stressed that dialogue and debate should continue. "I think for both sides it is the same thing. You must be patient, and you must be impatient at the same time," he said with a smile.

Kasper explained that he thought it may have been easier for him to engage in ecumenical discussions, since he had experienced division at first hand in the land of the Reformation. In 1517, Martin Luther nailed his 95 theses to the door of the Castle Church of Wittenberg, thus setting in train the breach with the Catholic Church.

"The Reformation started in Germany. We are at the origin of the Reformation, and therefore Reformation and relations with Lutheran Evangelical people are a concern for us because it divided us for many centuries. It still divides families today," Kasper said.

He noted that he had studied and later taught theology at German universities that each had two theological faculties, one for Protestants and the other for Catholics.

"So, ecumenical relations belonged to our life. One has many Protestant friends. I was bishop in this diocese, which is half Protestant and half Catholic," he said. "It is a normal reality for us, and I think this helps us a lot to understand the other angle, and to understand the urgency to work for unity and communion."

In an interview in November 2009 in Wittenberg, where Luther worked and lived, Kasper noted, "We have learned a lot in the last 50 years. At the university, I spent a lot of time teaching about Martin Luther, and I have learned from that experience too."

In his Stuttgart interview, Kasper acknowledged that some sections of the Catholic Church have difficulties with such ecumenical developments but said he had the backing of both Pope John Paul II and Pope Benedict XVI.

Looking back at what has been achieved in terms of ecumenical progress in the last decade, Kasper said it would not have been possible without friendship with his counterparts from other traditions. He said a deep friendship had developed between him and the Rev. Ishmael Noko, the Zimbabwean-born LWF general secretary.

Introducing Kasper to LWF assembly delegates in Stuttgart, Noko said, "You embody in your soul the spirit of ecumenism. You have been an encourager, when obstacles seemed insurmountable, and a truth teller."