Confession and Forgiveness: Ecumenical Practices Exemplified by Lutherans and Mennonites 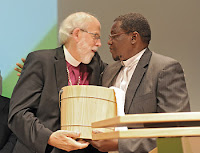 The most significant ecumenical event of the summer occurred on July 22, when the Lutheran World Federation officially asked forgiveness from the Mennonite World Conference for the violent persecution of Anabaptists in the sixteenth century, for the ways in which the early Lutheran reformers supported these persecutions with theological arguments, and for the negative portrayals of Anabaptists and Mennonites that have continued in their communities and theological institutions. The text of the official LWF statement "Action on the Legacy of Lutheran Persecution of 'Anabaptists'" as drafted and approved by the LWF in advance of this summer's assembly is available online. Below is an unofficial transcript of the response by Mennonite World Conference President Danisa Ndlovu of Zimbabwe, courtesy of the blog of a Lutheran theologian attending the assembly of the LWF in Stuttgart:

“At this time we are pro­foundly moved by your spirit of repen­tance and your act of seek­ing for­give­ness, and we remem­ber the prayer of George Blau­rock, first bap­tized Anap­batist, later burned at the stake, who said, “I sin­cerely pray for all my ene­mies”… We believe that God has already heard and granted this Anabap­tist prayer. We believe that God has heard and granted this appeal for for­give­ness. We humbly and joy­fully join with God in grant­ing this gift of for­give­ness. …God also is doing it in heaven. To God be the glory.

“In response we com­mit to pro­mote the inter­pre­ta­tion of the Lutheran-Anabaptist story, which we take seri­ously, the jointly told his­tory in the report. We will take care that your ini­tia­tive for rec­on­cil­i­a­tion is known among us… We will con­tinue delib­er­a­tion on resolv­ing the issues between our two com­mu­ni­ties, open to the move­ment of the Spirit. We will encour­age our local churches and insti­tu­tions to seek greater cop­per­a­tion and rela­tion with Lutheran chruches for ser­vice to the world. Again we say to God be the glory.

“We will learn to seek one another’s good from a pos­ture of vol­un­tary and mutual sub­mis­sion. This is how God’s trans­form­ing pres­ence is made vis­i­ble in the world. Amen.”
Posted by Steven R. Harmon at 2:55 PM