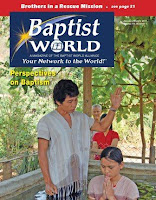 The current issue of Baptist World, the magazine of the Baptist World Alliance, includes my article "'One Baptism": A Study Text for Baptists" (vol. 58, no. 1 [January/March 2011], pp. 9-10). In this article I offer a Baptist perspective on the soon-to-be-released final version of the study text "One Baptism: Towards Mutual Recognition" drafted by the Commission on Faith and Order of the World Council of Churches. The full text of the magazine issue is available online (click hyperlinked title above). Here's a snippet from the beginning of the article:

In December 2008 veteran Methodist ecumenist Geoffrey Wainwright shared his perspectives on the progress and challenges of the modern ecumenical movement with the delegations to the conversations between the BWA and the Pontifical Council for Promoting Christian Unity. Members of both delegations were taken aback by his opening observation: “As far as the issue of baptism goes, the Baptists have won.”

Professor Wainwright was referring to the current ecumenical consensus that believer’s baptism by immersion is the normative biblical practice from which the practice of infant baptism derives its significance. The widely acclaimed convergence text Baptism, Eucharist and Ministry issued by the World Council of Churches in 1982 states, “baptism upon personal profession of faith is the most clearly attested pattern in the New Testament documents.” Many Baptists would be surprised to learn that the Catechism of the Catholic Church now regards immersion as the mode most theologically expressive of the significance of baptism and insists that those baptized as infants must go on to have personal experience of God’s grace. The wildest hopes of the seventeenth-century Baptists could not have imagined the degree to which much of the church today has converged toward important aspects of their historic dissent from the majority of the Christian tradition.

The WCC study text One Baptism: Towards Mutual Recognition stands in continuity with these encouraging ecumenical developments, and Baptists will be able to recognize themselves in its pages....(read more)
Posted by Steven R. Harmon at 4:21 PM