"Promoting International Christian (Comm)Unity, One Conversation at a Time" 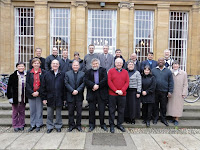 The Office of University Communications at Gardner-Webb University has issued the following press release about my recent participation in the international ecumenical conversations between the Baptist World Alliance and the Pontifical Council for Promoting Christian Unity. Thanks to Matt Walters of the GWU Office of University Communications for a well-written story based on the best media interview experience I've had to date.

Promoting International Christian (Comm)Unity, One Conversation at a Time

The goal of the conversations was to discover and illuminate the Biblical and theological principles that the Baptist and Catholic traditions hold in common – what Harmon calls the “convergences” between the churches that have long gone unnoticed – while also bringing to light the issues that continue to divide them. The delegations hope that by better understanding one another and illuminating those principles they hold in common, the churches might better represent the Gospel of Jesus.

“The conversations are a part of a larger ecumenical movement,” Harmon explains, “which seeks to find more visible forms of unity between the different churches that are currently divided. It has its roots in John 17, where Jesus prays for His disciples on the night before His death. In particular, He prays that they may be one as Jesus and the Father are one, so that the world may believe. That suggests that finding more visible forms of Christian unity is not an end in itself – it serves the greater end of evangelism.”

As a Baptist theologian, Harmon insists that the purpose of ecumenical discussion is not to water down core Baptist doctrines or to sacrifice congregational autonomy. Rather, Harmon explains, “ecumenists strive to clearly understand what other traditions believe and practice on their own terms, rather than our own caricatured images of them.”

Harmon argues that much of what Baptists and Catholics assume about each other is indeed “caricature.” The recent conversations revealed that several key theological tenets for Baptists – tenets like the doctrine of the Trinity, the understanding of the Person and the work of Christ, and even the doctrine of salvation by grace through faith – are held in common by the two churches.

Even as these unifying similarities were discovered through conversation, the delegations hope that similar conversations between Baptists and Catholics in their local communities will lead to better cooperation in ministry and a better manifestation of the unity of Christ’s body. “The delegations will issue a report in 2012 that will present all the convergences we’ve identified between Baptists and Catholics,” Harmon explains, “as well as points of ongoing disagreement. We hope the report will be used as an educational tool, in institutions of theological education but also by pastors whose congregations have personal relationships with Catholics in their towns. The ultimate goal would be some form of grassroots ecumenical engagement, perhaps with Baptists and Catholics finding common cause in local missions projects or developing study groups together to discuss the report and better understand each other.”

Harmon has made the ecumenical quest for Christian unity his life’s work. He teaches various courses on Christian theology, ethics, and ecumenism, and maintains an ecumenical blog at ecclesialtheology.blogspot.com. He also recently published his third book, “Ecumenism Means You, Too,” an accessible introduction to the ecumenical movement for a popular readership.

Located in Boiling Springs, N.C., Gardner-Webb University was founded in 1905 and is home to over 4,300 students from 39 states and 24 foreign countries. Gardner-Webb seeks a higher ground in higher education – one that embraces faith and intellectual freedom, balances conviction with compassion, and inspires in students a love of learning, service, and leadership.
Posted by Steven R. Harmon at 6:41 AM