Baptists and Catholics on Scripture and Tradition: Irreconcilable Differences or Differentiated Consensus? 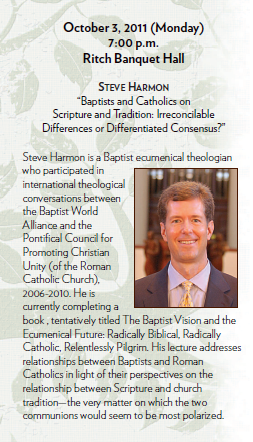 ﻿The promotional flier above advertises my upcoming public lecture "Baptists and Catholics on Scripture and Tradition: Irreconcilable Differences or Differentiated Consensus?" which I will deliver as part of the Joyce Compton Brown Lecture Series at Gardner-Webb University on Monday, October 3, at 7:00 PM in the Ritch Banquet Hall in the Dover Campus Center at Gardner-Webb University in Boiling Springs, North Carolina.

In this lecture I will argue that Baptists and Catholics share surprisingly much in common in their perspectives on the relationship between Scripture and church tradition—the very matter on which the two communions would seem to be polarized. The Vatican II Dogmatic Constitution on Divine Revelation Dei Verbum is replete with affirmations about the nature of revelation and the authority of Scripture which Baptists can affirm, but the seeming equation of the authority of Scripture and tradition in article 9 is a sticking point that must be addressed before proceeding to other points of difference that owe much to differing perspectives on the authority of tradition. A close reading of article 9 highlights points of Baptist disagreement even while revealing some openings for a Baptist appreciation of the trajectory in the development of Catholic teaching on tradition evident in this text. Baptists cannot offer an unqualified endorsement of article 9, but they can find a place within the pattern of theological contestation that produced it. This text with which Baptists cannot unequivocally agree thus points to a larger opening for convergence between Catholics in their practice of conciliar contestation and Baptists in their identity as dissenting catholics.

This lecture is rooted in material that will appear as a chapter in my forthcoming book with working title The Baptist Vision and the Ecumenical Future: Radically Biblical, Radically Catholic, Relentlessly Pilgrim. I'll post details about its publication here on Ecclesial Theology as they're available.
Posted by Steven R. Harmon at 8:56 AM