Baptist representation at Assisi Day of Reflection, Dialogue and Prayer for Peace and Justice in the World 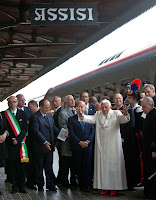 Today (October 27) Neville Callam, General Secretary of the Baptist World Alliance, and John Upton, President of the BWA, are in Assisi, Italy for a Day of Reflection, Dialogue and Prayer for Peace and Justice in the World along with about 300 other global religious leaders including Pope Benedict XVI; Archbishop Rowan Williams, leader of the worldwide Anglican communion; Ecumenical Patriarch of Constantinople Bartholomew I, leader of the Orthodox churches; and Olav Fykse Tveit, general secretary of the World Council of Churches. The Associated Baptist Press has posted a story about this event.
Following the event in Assisi, BWA General Secretary Neville Callam will travel to Heraklion, Crete, where he will join Baptist theologian Paul Fiddes of Oxford University and me for a meeting with representatives of the (Eastern Orthodox) Ecumenical Patriarchate for "pre-conversations" October 31 and November 1 to explore the possibility of a formal series of bilateral ecumenical conversations between the BWA and the Orthodox Churches. I invite readers of Ecclesial Theology to pray for our meetings, that they might further the quest for the visible unity of the church for which Jesus prayed in John 17.﻿
Posted by Steven R. Harmon at 10:16 AM