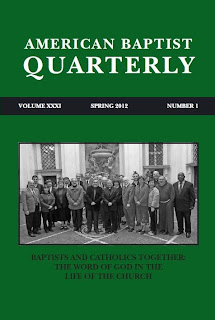 The report of the 2006-2010 series of bilateral ecumenical conversations between the Baptist World Alliance and the Catholic Church has now been published. A new issue of the American Baptist Quarterly (vol. 31, no. 1), a publication of the American Baptist Historical Society, includes the full text of the 95-page report "The Word of God in the Life of the Church" along with introductions and commentaries. An editorial introduction by Curtis W. Freeman, who is co-editor of the American Baptist Quarterly as well as Research Professor of Theology and Director of the Baptist House of Studies at Duke University Divinity School, makes connections between these recent international conversations and the national-level conversations that began in 1967 soon after the Second Vatican Council between representatives of the American Baptist Churches USA and the United States Catholic Bishops' Committee for Ecumenical and Interreligious Affairs (pp. 3-5). Baptist-Catholic dialogue commission co-chair and report co-editor Paul S. Fiddes, Professor of Systematic Theology at Oxford University, provides an extensive introduction to the report that contextualizes the themes of the report in relation to other ecumenical dialogues the Baptist World Alliance and the Catholic Church have held with other Christian communions (pp. 7-27). The text of the report (pp. 28-122) is followed by a pair of responses to the report by two Baptist theologians of note who were not members of the Baptist delegation to these conversations: a commentary by Josué Fonseca, who was Professor and Academic Dean at the Baptist Theological Seminary in Santiago, Chile from 1978 to 2008 before his current service as pastor of First Baptist Church in Concepcion, Chile (pp. 123-37), and a commentary by Stephen R. Holmes, Senior Lecturer in Theology at the University of St. Andrews in Scotland who is also a minister in the Baptist Union of Scotland (pp. 138-53).

A follow-up post will provide information for ordering individual copies of this special issue of the American Baptist Quarterly when available. Readers of Ecclesial Theology who are attending the General Assembly of the Cooperative Baptist Fellowship in Greensboro, North Carolina later this week (June 26-28) will be able to purchase copies of this issue at the Duke University Divinity School Baptist House of Studies booth. The report will also be available at the Baptist World Alliance annual gathering in Jamaica.

The report will also be published by the Baptist World Alliance and the Catholic Church in various print and electronic media. I will provide details for those publications when they are available here at Ecclesial Theology, along with other information about the report and notices of events and publications related to its ongoing reception by Baptists and Catholics.
Posted by Steven R. Harmon at 5:23 PM