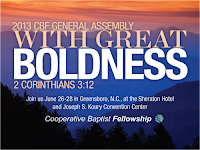 Last week the Associated Baptist Press ABPnews Blog hosted my reflections on the 2013 General Assembly of the Cooperative Baptist Fellowship, the Baptist communion with which my local congregation and the School of Divinity where I teach are affiliated. The full text of that blog post appears below, with the addition of a Vimeo link for the closing communion service referenced in the post.

Enthusiastic about our Fellowship


On the night of June 28, I posted to Facebook this status update from my hotel room in Greensboro, North Carolina:

After a few weeks’ further reflection that included a trip to Jamaica for some time with the global Baptist community at the Baptist World Alliance annual gathering, I still feel the same way. Here are five reasons the Greensboro gathering—my sixteenth General Assembly since the 1992 meeting in Fort Worth I attended as a seminary student—left me feeling more enthusiastic than ever about our Fellowship.

1. Youth. When I began teaching theology in one of the CBF partner schools in the late 1990s, the generational center of gravity evident in General Assemblies was considerably older than I and my students were. I’m of course a good bit older now, but the generational center of gravity in Greensboro was young. Everywhere I went in the Koury Convention Center I saw my current students, my former students, and their counterparts from other CBF-related institutions of theological education. During the Gardner-Webb University School of Divinity luncheon, Dean Robert Canoy mentioned something that suggests this trend will continue in his remarks to a capacity crowd of almost 100 alumni, students, and friends of the school: at a time when most institutions accredited by the Association of Theological Schools in the United States and Canada have been experiencing declining enrollments, the number of students enrolled in Gardner-Webb’s School of Divinity has been growing. In the third decade of CBF’s existence, the leadership of its congregations is increasingly younger, supplied by ministers educated at CBF partner schools like Gardner-Webb.

2. Vision. Once upon a time, the vision of CBF-affiliated Baptists sometimes seemed to be driven by anti-fundamentalism. While that was an understandable reaction to the experiences that led to the formation of our Fellowship, the increasingly youthful center of gravity in CBF life is not interested in re-fighting the Baptist battles of the 1980s and 1990s. In exhibit hall conversations, at luncheons and other special events, and in plenary sessions and worship services I seldom heard about the Southern Baptist Convention’s past and never about its present actions. Instead I heard seasoned and younger ministers alike speak enthusiastically about what their congregations are doing to be Christ’s body in their communities. I heard Fellowship Baptists dream aloud about ways of ministering to the world as Christ’s body that might embrace partnerships with our sisters and brothers in the American Baptist Churches USA. I even heard the word “ecumenical” mentioned in discussions about collaborative ministry with a frequency and naturalness I don’t recall from previous assemblies. All this is a refreshing movement beyond what in earlier years sometimes seemed to be a preoccupation with being more authentically Baptist than the fundamentalists.

3. Eucharistic community. As I blogged after last year’s gathering in Fort Worth, a distinctive feature of CBF General Assemblies from the 1998 Houston assembly onward in comparison with the previous Baptist experiences of most of us has been the celebration of the Eucharist. Those who also attend the pre-assembly Baptist Women in Ministry convocation usually commune twice in three days when they come together each year. Despite long-aired protestations that we are not a denomination, our celebrations of the Eucharist beyond the local congregation embody a conviction that there is some sort of ecclesiality to what happens when we come together as a Fellowship. I’m all for the continuation of this practice along with more intentional theological reflection on the ecclesiological significance of our practice.

4. Theology. Speaking of the Eucharistic practice of our Fellowship, this year’s closing communion service was movingly and memorably significant for reasons theological as well as aesthetic. The preparation of the table was facilitated by the Moving Liturgy Dance Ensemble from Burlington, North Carolina. The troupe concluded their liturgical dance with a procession of the elements to the table that included the elevation of paten and chalice as we sang David Mowbray’s hymn “We Believe in God Almighty.” Set to the medieval plainsong tune DIVINUM MYSTERIUM (familiar through its association with “Of the Father’s Love Begotten,” John Mason Neale’s English translation of a fourth-century Latin hymn by Aurelius Prudentius), Mowbray’s text is a three-stanza paraphrase of the Trinitarian-structured Niceno-Constantinopolitan Creed—the Eucharistic creed of the ecumenical church that confesses the incarnational faith in which the material becomes the sacramental realm of divine encounter. In our beginnings we understandably tended toward an aversion to theological affirmations because we’d been on the receiving end of their coercive use, but in Greensboro there was robust theology embedded and enunciated in our liturgy. And I got the vibe that we were ready to embrace it without worrying that we might be betraying what it means to be free and faithful Baptists.

5. Suzii Paynter. Our new Executive Coordinator has embodied in her leadership of the Fellowship thus far everything that made me enthusiastic about the Greensboro General Assembly. If we can live into the vision signaled in the message Suzii Paynter preached and the service of the table at which she presided along with her husband Roger that Friday evening, our Fellowship has an exciting future.

I’m enthusiastic about it.