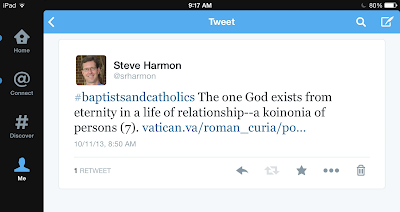 To encourage reading and reception of The Word of God in the Life of the Church: A Report of International Conversations between The Catholic Church and the Baptist World Alliance 2006-2010, I've launched a series of occasional Twitter tweets on what #baptistsandcatholics affirm together, drawn from the bold type sections of the report that summarize Baptist-Catholic agreement (section numbers in parentheses). To keep up with this series, follow @srharmon on Twitter. Tweets in the series are searchable by hashtag #baptistsandcatholics. Tweets in the series are searchable by hashtag #BaptistsCatholics. (The first six tweets in the series were hashtagged #baptistsandcatholics; the new hashtag #BaptistsCatholics saves three precious characters for tweet text.)
Posted by Steven R. Harmon at 2:12 PM