Matthew Emerson on Towards Baptist Catholicity 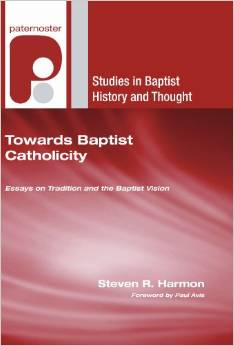 I'm grateful for the appreciative response to my book Towards Baptist Catholicity: Essays on Tradition and the Baptist Vision offered by Matthew Emerson on his blog Secundum Scripturas. I'm also grateful to know that eight years after its 2006 publication, the book is still finding readers and eliciting response.

Here's an excerpt from the beginning of Emerson's post:

I recently read Steve Harmon’s Towards Baptist Catholicity: Essays on Tradition and the Baptist Vision. I’m beginning some sustained work with my friend and colleague Luke Stamps on Baptist life and its relationship to the larger Christian tradition, and Harmon’s collection of essays is one of the most prominent works on the subject. In this post I hope to affirm much in Harmon’s book, but also offer some pointed questions and critiques from a different perspective (i.e. conservative Southern Baptist evangelical) than his own.

First, the affirmations. I cannot say strongly enough how much I agree with Harmon on the need to position Baptist life within the larger body of Christ.... (read the full blog post at Secundum Scripturas)

I am currently wrapping up work on a follow-up to Towards Baptist Catholicity (under contract with Baylor University Press with working title The Baptist Vision and the Ecumenical Future: Radically Biblical, Radically Catholic, Relentlessly Pilgrim), which will more fully develop and extend some themes from the earlier book in ways that may answer to some of the questions and critiques expressed in Emerson's post. In the meantime, I'll offer some brief responses below.

1. The role of liturgical practices

I'm with Emerson (and Augustine and James K. A. Smith) on the role of embodied liturgical practices in the holistic Christian formation of persons. There is a reductionistic cognitive emphasis in the Baptist appropriation of Zwingli on the anamnetic function of the Supper as a memorial meal, for example, that extends to other dimensions of worship, and I'm on board with efforts to resist such a reduction. I grant that there is something of a lingering cognitive emphasis in the chapter on worship in Towards Baptist Catholicity--e.g., "As worshippers have the divine story imprinted upon their consciousness and find their place within this story week after week over a long period of time, they are formed in the faith and fitted for the practices that constitute the Christian life" (p. 157). However, the over-arching concern of that chapter was the retrieval in contemporary Baptist worship of the patristic coinherence of liturgy and theology as summarized in the formula lex orandi, lex credendi drawn from Prosper of Aquitaine, with the theological formation of Christians through what happens in worship as a particular point of application. Thus there is a focus on the cognitive in that chapter, but it is not intended to be exclusive of the other dimensions of formation through liturgical practices. A broader application is suggested by my descriptive and prescriptive definition of worship therein as "the participatory rehearsal of the story of the Triune God" (p. 155), a definition that I've tweaked slightly for a somewhat different application in a chapter on the function of Scripture in the life of the church in my forthcoming book, where its current formulations is "the participatory rehearsal of the biblical story of the Triune God." The more broadly suggestive term is "participation." The practices of worship are intended to draw us into ever-fuller participation in the life of the Triune God, a participation that cannot be merely cognitive. I'm in the midst of preparing a response to Sarah Coakley's God, Sexuality, and the Self: An Essay 'On the Trinity', the first volume in her projected four-volume systematic theology On Desiring God, for a panel discussion of the book at next week's annual meeting of the National Association of Baptist Professors of Religion in Atlanta (my particular responsibility is assessing her re-reading of the formative, patristic sources for the origins of the doctrine of the Trinity). A significant contribution of Coakley's work is her recovery of a neglected dimension of the patristic concept of the Trinity, namely its pneumatic orientation in which the Spirit draws us ever more fully into participation in the life of the Triune God through practices of prayer and asceticism. I'm on board with this, too, and see it as connected with my proposals about the role of liturgical practices.

My intention in distinguishing between the ultimate authority of the Triune God and the derivative authority of the Scriptures was not to dichotomize them, but rather to characterize properly the dynamic and integral relationship between them in an economy of revelation. (Yes, speech-act theory does have a finely nuanced way of doing this, as seen not only in Vanhoozer but also Stanley Grenz.) I do, however, think it important to qualify the relationship between revelation qua revelation and Scripture's participation in that revelation in a way that is not "direct," and that qualification is related to my reply below regarding Emerson's concerns about my treatment of the relationship of Scripture and tradition.

Revelation, in Christian understanding, is mediated. To be sure, revelation is first and foremost God speaking and acting, but this speaking and acting is received, remembered, and recorded by a community that mediates revelation by handing on--traditioning--what it has received, remembered, and recorded. My characterization of the coinherence of Scripture and tradition is not intended as an anthropocentric account of Scripture's participation in divine revelation, for the Spirit is at work among the people of God in its traditioning of revelation. (With reference to the development of the New Testament canon, by the way, I do not intend to suggest that it was merely decided by the church in the fourth century. In fact, the fourth-century definitions of the scope of that canon--in regional synods and episcopal communications, it should be noted, rather than in ecumenical councils--are affirmations of a long-developing consensus in the early church, with substantial second- and third-century attestation to the early formation of this consensus.)

Emerson writes that I "seem to root the church’s beliefs about the Trinity, Christology, and Scripture in a communitarian practice rather than in revelation." Here what I intend is not a contrast between the authority of the community and the authority of divinely-given revelation, but rather one between the authority of the community and the authority of the individual. Furthermore, the community that functions in a pattern of authority is not community per se, but the community that is actively seeking to participate ever more fully in the reign of God by bringing its life together under the rule of Christ through the guidance of the Spirit. This vision of Christian community belongs, I think, to the essence of the Baptist vision and serves to correct a reductive individualism that became intertwined with the Baptist tradition in the wake of the Enlightenment, especially in its American instantiation. Here it's also important to keep in mind that the concrete ecclesial community of reference from which I write is the Cooperative Baptist Fellowship, which has its origins in controversy within the Southern Baptist Convention in the 1970s through early 1990s. Emerson's concrete ecclesial community of reference is the continuation of one trajectory within that tradition; mine is one with a trajectory that once co-existed with it but has continued differently. That different trajectory has historic affinities with mainline Protestant liberalism, and I think the way forward for this trajectory is along the lines of postliberal theology--thus the invocations of Lindbeck. Another postliberal/narrative influence closer to home is the late Baptist theologian James Wm. McClendon, Jr. I agree that if Emerson's "conservative Southern Baptist evangelical" trajectory is to engage fruitfully the issues I treated in Towards Baptist Catholicity, it will have to be done in a different manner--not along the lines of Lindbeck/McClendon but probably in a postconservative path as exemplified by Vanhoozer. But I think that when the two trajectories, postliberal and postconservative, take up the concerns that are important to both Emerson and me, they are angled toward many of the same ends. Thus there is the potential for good developments in intra-Baptist relations as well as in Baptist interdenominational ecumenical relationships.

I don't mean to suggest that there are no significant remaining church-dividing matters of doctrine, though I do think the Joint Declaration on the Doctrine of Justification has rendered soteriological objections moot, and while Mariological concerns do remain significant, the progress in mutual understanding of one another's perspectives on the role of Mary in the life of the church reflected in that section of the report from the 2006-2010 conversations between the Baptist World Alliance and the Catholic Church offers hope that this too is not insurmountable. (Emerson also refers to Peter Leithart in this connection; I have my own issues with Leithart, but I think he's cleared himself of the charge of sliding over doctrinal difference with Catholicism and Orthodoxy in his post "Too catholic to be Catholic"--see especially his comments on "liturgical idolatry" therein.) Rather, my intention with the final chapter of Towards Baptist Catholicity was to make clear my conviction that there are more significant reasons than doctrinal disagreement with Catholicism, Orthodoxy, or Anglicanism for remaining Baptist (or some other tradition) instead of following the yearning for a fuller qualitative catholicity to Rome, Constantinople. or Canterbury. In that chapter I suggested that the quest for the visible unity of the church at present calls for the fuller cultivation of this catholicity within our divided churches rather than moving to another church we might believe already possesses that catholicity to a greater degree than our own. That's a conviction that I'm developing more fully in my current project, with "receptive ecumenism" as a paradigm.

There's much more that could be said in response, but for now I'm going to return to crafting my response to Coakley's engagement with patristic trinitarian theology. I'm grateful for Emerson's interest in my work and for the constructive and cordial manner in which he's engaged it. This sort of theological dialogue is surely a good thing for the church, within and beyond Baptist ecclesial life.
Posted by Steven R. Harmon at 2:36 PM