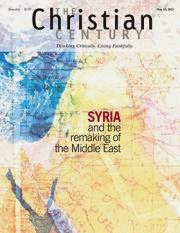 The May 13, 2015 issue of the Christian Century (vol. 132, no. 10) includes my review of Michael Kinnamon's book Can a Renewal Movement Be Renewed? Questions for the Future of Ecumenism (Eerdmans, 2014). The review appears on p. 39 of the print edition; an electronic version of the review is currently available on the Christian Century web site. Here's an excerpt from the beginning of the review:

Lament over the current “ecumenical winter” and analysis of the factors that have contributed to it have become commonplace in recent ecumenical literature. As he considers the future of ecumenism in Can a Renewal Movement Be Renewed? Michael Kinnamon gives four reasons for why the ecumenical movement stands in need of renewal: “loss of commitment among church leaders to the goal of Christian unity,” “divisions and other signs of weakness within the ecumenically supportive churches,” “an increasing split between two sets of ecumenical priorities,” and “diminishment of key instruments of the ecumenical movement, including councils of churches”....(read the full review at Christian Century)
Posted by Steven R. Harmon at 11:55 AM