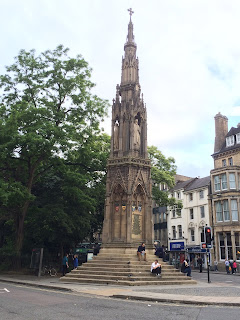 Last week I was in Oxford (UK), a setting that frames the first chapter of my new book Baptist Identity and the Ecumenical Future. The chapter begins:

In December 2010 a joint international commission of the Baptist World Alliance and the Catholic Church met in Oxford, the "city of dreaming spires," to envision the ecumenical future and how their communions might take concrete steps toward inhabiting it together (p. 3).

Chapter 1 concludes with these two paragraphs that reference the Martyrs' Memorial and its inscription shown in these photos taken in Oxford last week:

Baptists and members of other communions who take up this book’s challenge to journey together toward the ecumenical future will likely not enjoy such warm relationships with many from their own tradition, for some of the greatest obstacles in this journey are located within particular communions rather than between them. Each day of the 2010 Baptist–Catholic conversations in Oxford, delegates passed the Martyrs’ Memorial as they walked along St. Giles’ across from Regent’s Park College. The inscription below the monument’s Gothic spire reads, "To the Glory of God, and in grateful commemoration of His servants, Thomas Cranmer, Nicholas Ridley, Hugh Latimer, Prelates of the Church of England, who near this spot yielded their bodies to be burned, bearing witness to the sacred truths which they had affirmed and maintained against the errors of the Church of Rome, and rejoicing that to them it was given not only to believe in Christ, but also to suffer for His sake; this monument was erected by public subscription in the year of our Lord God, MDCCCXLI." 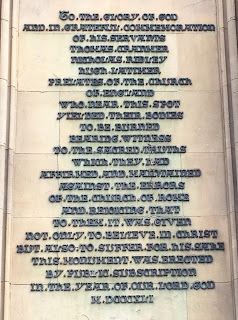 The date and the explanation of the monument’s origins are not-so-subtle clues that the monument is not really about the Protestant martyrs named in its inscription. The year 1841 fell in the midst of the most vitriolic period of public debate in England over the proposals of the Oxford Movement. The final tract of the Tracts for the Times was published that year. In Tract 90 John Henry Newman, then four years away from his reception into the Catholic Church, had argued that the Tridentine expression of Catholic doctrine could be reconciled with the teachings of the Anglican Thirty-Nine Articles. The Tractarians’ opponent Charles Golightly, an Anglican cleric in Oxford, succeeded in raising funds for the construction of the memorial through a national subscription campaign. Its message, directed against this early form of receptive ecumenism in the Church of England, was clear: "Roman Catholics are the epitome of evil, for they murdered the founders of your national church. Don’t even think of moving in their direction, liturgically or theologically."

Baptists whose vision includes an ecumenical future in full communion with Catholics and other Christians are already the occasional object of similar rhetoric from some members of their own communion. Like the leaders of the Oxford Movement, the contributions of these catholic Baptists may bear the fruit of a more widespread Baptist reception of the gifts of Catholics and other Christians in a way that becomes evident only many decades after their lifetimes. I have written this book in the hope that the tribe of those who long for the visible unity of Christ’s church might increase among Baptists, and that other Christians might recognize them, so that together we can make our pilgrim journey toward the ecumenical future (pp. 18-19).

Interested in reading more? Order Baptist Identity and the Ecumenical Future from Baylor University Press or via Amazon.