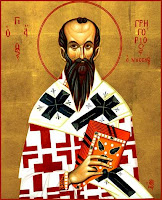 Today (March 9) is the feast day of St. Gregory of Nyssa (d. ca. AD 395), one of the subjects of my doctoral dissertation "Apokatastasis and Exegesis: A Comparative Analysis of the Use of Scripture in the Eschatological Universalism of Clement of Alexandria, Origen, and Gregory of Nyssa" (later published in revised form as Every Knee Should Bow: Biblical Rationales for Universal Salvation in Early Christian Thought). My early historical work on Gregory of Nyssa and other aspects of patristics (the study of the fathers--and mothers--of the church from the second century through the beginnings of the medieval era) nudged me toward my current work in ecumenical theology in at least a couple of ways. First, as a Baptist theologian this encounter with the shared early tradition of the whole church forced me to reckon with the relation of my own tradition of faith and practice not only to this common heritage but also to all other churches that are heirs to the "Great Tradition." Second, prior to my involvement in bilateral and multilateral ecumenical conversations, my first experiences of embodied international ecumenical engagement came in the form of conferences such as the Ninth International Colloquium on St. Gregory of Nyssa held in Athens, Greece in 2000. The conference participants included scholars representing the whole church--Catholic, Orthodox, and Protestant, including even Baptist, Church of Christ, and non-denominational Bible church traditions--all bound together by our common interest in Gregory of Nyssa as a shared teacher of the church. During the week I had the opportunity to participate in the divine liturgy in Greek Orthodox churches and in an English-language service of a small Church of Christ congregation at which Everett Ferguson, a retired professor from Abilene Christian University and fellow Gregory of Nyssa specialist, was the guest preacher. Although as a Baptist I could not receive communion in any of these services, in association with our ecumenical scholarly collaboration in patristic studies these experiences of worship in the midst of the church's divisions nourished my desire to make some contribution of my own to the quest for the visible unity of the church. Therefore it's encouraging to me that a decade later it is increasingly much more commonplace for graduate students in theology from Baptist and other Free Church traditions to do their work in patristics. This bodes well for the ecumenical future, I think.