Ignatius of Antioch on the Incarnation and Social Justice 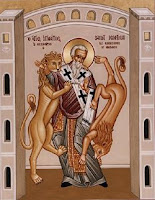 With lots of people talking about Christian perspectives on "social justice" in the wake of the remarks of a certain on-air personality, it seemed an opportune time to point to one of my favorite passages from Ignatius of Antioch, an early Christian bishop who was martyred in the first decade of the second century (perhaps AD 107) only a few years after the later New Testament documents were written. In letters Ignatius wrote to various churches in Asia Minor while a guard of Roman soldiers escorted him from Antioch to his martyrdom in Rome, he took issue with proponents of an early heresy called Docetism. The Docetists, whose name derives from the Greek dokeo, "to seem" or "appear," taught that it was unbecoming of God to share in corrupt human flesh or to experience the imperfection of human suffering. Thus they taught that while Christ was fully God, his divinity could not really be embodied in human flesh and he could not really suffer; therefore he merely seemed to be human and to suffer and die. In his letter to the Smyrneans, Ignatius drew clear connections between this erroneous understanding of the identity of Christ and their shunning of the social obligations of Christian faithfulness:

But take note of those who have wrong-headed ideas about the gracious gift of Jesus Christ that has come to us, and see how they are opposed to the mind of God. They have no interest in love, in the widow, the orphan, the oppressed, the one who is in chains or the one set free, the one who is hungry or the one who thirsts (Smyrneans 6.2).

It's not saying too much to suggest that the claim that the mission of the church does not involve the pursuit of social justice is heresy in the traditional Christian sense of the term. I think Ignatius of Antioch would agree.
Posted by Steven R. Harmon at 10:57 AM