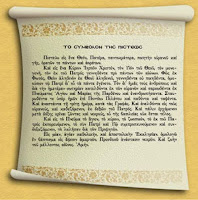 As a Baptist theologian, I'm often asked the question addressed in my guest commentary "Do Real Baptists Recite Creeds?" in Baptists Today 22, no. 9 (September 2004), p. 27. The original article is available electronically as part of the September 2004 issue of Baptists Today archived publicly online in PDF (scroll to p. 27). I'm posting a condensed adaptation of the original article here for easier access:

If a local Baptist church were to exercise its congregational freedom by embracing weekly confession of the Apostles’ Creed or “Nicene” Creed, would it be engaging in a non-Baptist practice?

Some Baptists have thought so. In the introductory courses I teach in Christian Theology, I have for several years opened each class session with the singing of a hymn and the recital of the Apostles’ Creed during the first half of the semester and the “Nicene” Creed during the second half of the term. One former student wrote on an exam paper that he had refused to join in reciting the creeds became “I’m a Baptist, and Baptists don’t believe in creeds.” (He had the freedom to make that refusal and reach that conclusion without academic penalty.)

My student’s reluctance to confess the creeds exemplifies a widespread sentiment in our context of Baptist life. One reason many Baptists see the creeds as un-Baptist is the oft-repeated slogan “No creed but the Bible!” Many Baptists take this to be a concise declaration of historic Baptist identity. By 2009 Baptists had existed for 400 years as an identifiable denominational tradition, but it has only been during the past century and a half that some Baptists in the United States have echoed this slogan. Its origins are outside the Baptist movement proper in the work of Alexander Campbell (1788-1866), founder of the Disciples of Christ. Campbell’s aversion was not to the ancient creeds per se — he frequently referenced them in his writings — but rather to the coercive use of more detailed Protestant confessions as tests of fellowship.

Baptists are right to resist this coercive use of either creeds or confessions, but we would be wrong to let this legitimate concern keep us from experiencing the benefits of the proper uses of the creeds. The Apostles’ Creed and “Nicene” Creed are properly used as expressions of worship. They are not lists of doctrinal propositions to which assent is compelled; they are summaries of the biblical story of the Triune God, drawn from the language of the Bible itself. The creeds function as the Christian “pledge of allegiance.” They declare the story to which we committed ourselves in baptism. Reciting the creeds thus regularly renews our baptismal pledges.

Having no fixed or mandated liturgy, Baptist churches are free to adopt whatever worship practices they find beneficial. Freely choosing to experience the benefits of confessing the ancient ecumenical creeds is a most Baptist thing for free and faithful Baptists to do.