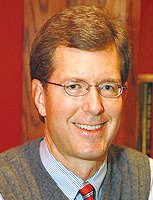 The Religious Herald, the newsjournal of the Baptist General Association of Virginia, has published the feature story "Ecumenical Dialogue Clarifies Baptist Distinctives, Says Gardner-Webb Prof" by managing editor Robert Dilday. The story is based on the Gardner-Webb University press release "GWU Instructor Participates in Expoloratory Conversations between Baptists and Orthodox" but incorporates additional quotations and draws from other stories by Dilday about Baptist World Alliance ecumenical dialogue. Here's the opening of the Religious Herald story:

“The purpose of ecumenical discussions is not to water down core Baptist doctrines, or to sacrifice congregational autonomy,” said Steven Harmon, adjunct instructor of Christian theology at the Baptist-affiliated school in Boiling Springs, N.C., in a university press statement. “Rather, ecumenists strive to clearly understand what other traditions believe on their own terms, rather than relying our own caricatured images of them. That also involves more clearly understanding those doctrines and practices that make us different, even as we search for the convergences that will help us establish unity. (read more)

The Gardner-Webb press release includes a link to additional quotations from me regarding the nature and purpose of ecumenical dialogue excerpted from two interviews I gave during this year.

UPDATE: Associated Baptist Press has issued the Religious Herald story as an ABP release: http://www.abpnews.com/content/view/6996/53/.
Posted by Steven R. Harmon at 10:50 AM