Baptist leaders meet with Patriarch of Moscow and All Russia (updated) 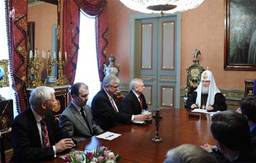 A news service associated with the Russian Evangelical Alliance reports that on March 29, 2012 Patriarch Kirill I, Patriarch of Moscow and All Russia, met with a group of Baptists that included John Upton of Virginia, President of the Baptist World Alliance; Hans Guderian, President of the European Baptist Federation; and Aleksey Smirnov, President of the Russian Union of Evangelical Christians-Baptists (see linked article "Baptist Leaders Meet Patriarch Kirill"). This meeting may bode well for exploratory conversations now underway regarding the possibility of a formal international dialogue between the Baptist World Alliance and the Eastern Orthodox churches.

Update: The Baptist World Alliance has also issued a press release regarding this meeting.
Posted by Steven R. Harmon at 10:59 AM