Roberts-Thomson on Baptists and the ecumenical movement 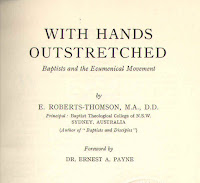 While doing research for the chapter on the Baptist tradition I'm contributing to the forthcoming Oxford Handbook of Ecumenical Studies, I recently came across Edward Roberts-Thomson's book With Hands Outstretched: Baptists and the Ecumenical Movement (London: Marshall, Morgan & Scott, 1962). Roberts-Thomson (1909-1987), an Australian Baptist who after pastorates in Australia served as principal of New Zealand Baptist Theological College and the Baptist Theological College of New South Wales (Morling Baptist College) in Sydney, Australia, sought with his book to "widen the knowledge and understanding of his own denomination and at the same time to show those of other Christian communions the reasons why Baptists often seem intransigent and suspicious in the face of ecumenical developments" (from Ernest A. Payne's foreword to the book, p. 5). Before I return it to the library on today's inter-library loan due date, I'll pass along a few brief excerpts below.

All Baptists honour their great historian K. S. Latourette for his insight into the history of the Church. Speaking of the Ecumenical Movement, he reminds us that in regard to it we must learn the way of humbleness and teachableness. This is by no means easy. For if there is one sin above all others that characterises Baptists as a people it is that of pride in their Scriptural correctness (p. 20).

Chapter 3, "How Baptists Think of Ecumenicity," begins with a subsection titled "Baptist Catholicity" (a choice in terminology interesting to me in light of the title of one of my own books and the responses of some who have taken exception to it):

Catholicity is not a term Baptists like....Their doctrine of the Church stems from their conception that personal encounter with, and response to, the living Christ is the fundamental thing which makes for incorporation into the Church which is His Body....Thus, for Baptists, Catholicity is measured in terms not of denominational adherence but in terms of allegiance to Christ. For them ecumenism conveys the same idea. Both Catholicity and Ecumenicity are meaningless for them apart from Christ....But Baptists are guilty of misunderstanding their own history if they think this closes the issue for them. Therefore it is imperative that close attention should be given to early beliefs and practices as well as to modern developments amongst them in an endeavor to discover how fixed are the judgments given. When we search their own history we will find that it is not true to say that Baptists are purely "Sect" types, nor that they have been anti-ecumenical in their history. Where Baptists have become obsessed with the individual to the exclusion of the institution, and where they have closed their hearts and minds to fellowship with Christians of other traditions, they have been untrue to their own highest ideals (pp. 34-35).

In the same chapter is a subsection titled "John Smyth Leads the Way":

John Smyth's Confession of Faith breathes the true spirit of Baptists in relation to divisions within the Church. He was far in advance of most in his day, and of very many Baptists even in this twentieth century.John Smyth declared that "all repenting and believing Christians are brethren in the communion of the outward visible Church, wherever they may live, or by what name they can be named, be they Roman Catholics, Lutherans, Zwinglians, Calvinists, Brownists, Anabaptists, or other pious Christians, who in truth, and by godly zeal, strive for repentance and faith, although they are implicated in great ignorance and weakness. Nevertheless, we greet them altogether with a holy kiss, deploring with our whole hear that we, who strive for one faith, one Spirit, one Lord, one God, one Body, one Baptism, should be so divided and severed into so many sects and splittings, and that for so less considerable reason." Would Baptists today repudiate this early plea for unity? (pp. 35-36).

Later in the book Roberts-Thomson notes Southern Baptist M. E. Dodd's vitriolic opposition to any involvement of the Baptist World Alliance in ecumenical affairs voiced from the floor of the 1947 BWA Congress, observing:

Thus was brought into the open what has since become apparent to all who look closely at the Baptist reactions to ecumenicity throughout the world. That is, that the Baptist world, ecumenically, can be divided into two groups: those who are of the Southern Baptist point of view, or are closely influenced by it, and those who are not (p. 94).

While one can easily point to exceptions to Roberts-Thomson's generalization in the final excerpt, it seems to me that in general it holds true, and that what was true in 1947 has only been exacerbated in recent years. It also seems to this theologian who identifies with the Cooperative Baptist Fellowship but was ordained as a Southern Baptist minister that not everything many in my circles perceive as problematic in the current configuration of the Southern Baptist Convention can be attributed to the outcome of "the controversy" of 1979 and subsequent years, for much that was problematic was with us long before then.
Posted by Steven R. Harmon at 8:20 AM